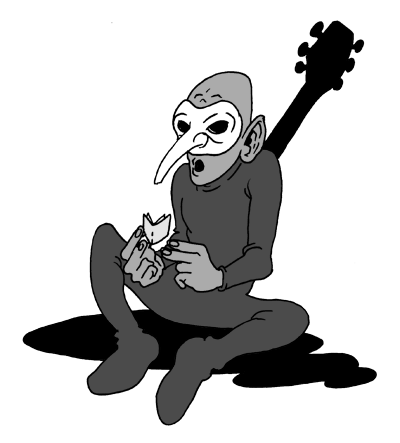 My friend Brian John Mitchell is kind of a jackass, but he’s a loveable one. He’s also super talented, extremely ambitious and the single most productive human being I’ve ever met. He owns and operates his own record label/comic publishing/web-zine empire called Silber Media. I think he’s also in 38 different bands, he’s constantly touring and constantly making the tiniest comic books in existence.

Among his comics are: Lost Kisses, Just a Man, Worms, XO, Mecha and many others, including Cops & Crooks, of which I drew half. I’m also currently wrapping up another comic I’m drawing for him called Monthly. I’m drawing it out of spite. However, I’m in good company with other books drawn by Kurt Dinse, Jason Young and some dude named Dave Sim.

Brian recently interviewed 209 cartoonists and comic artists, including myself. I can guarantee you I have the dickiest responses amongst the thousands of folks he questioned. Check those out here.

Brian had asked me to draw all the listeners of my podcast. I told him he wasn’t allowed to request anything anymore. But, here’s a representation of him and his company and logo.