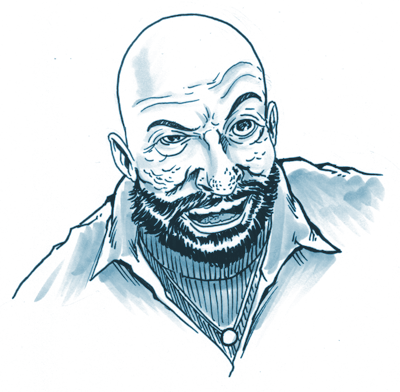 By request of Andrew Miller, former co-worker and star of the short movie I wrote called All the Marbles, also the first person with whom I ever drank that resulted in my first hangover.

I’m not good at likenesses, but I hope I got the spirit of Sid Haig down. Andy had requested I draw Sid from one of his appearances in The Dukes of Hazzard, but it was hard to find non-Captain Spaulding references for Haig. Haig is one of only three or four celebrities I’ve ever met, and it’s one of the better experiences I’ve had in doing so.

He was at a horror convention here in Dayton, fresh off of House of 1,000 Corpses, but just before The Devil’s Rejects. I got a picture taken with him (and oddly, he looks a little like my grandpa) and I had him sign a copy of Rob Zombie’s Spookshow International Comic for my girlfriend. As he signed the book, he asked why I wanted that particular issue autographed. I told him because it featured an interview with him in the back, and that it was for my girlfriend, who loved House of 1,000 Corpses. Upon hearing that the book was for a lady, he stopped signing.

“Uh… You probably want me to cross out what I wrote then,” he said. “It’s pretty raunchy.” I told him, nope, raunch it up.

He handed me the book and shook my hand. I read what he wrote over a drawing of Captain Spaulding sitting around with some strippers: “Mmm mmm! Pussy! Better eatin’ than fried chicken!”
My girlfriend loved it.