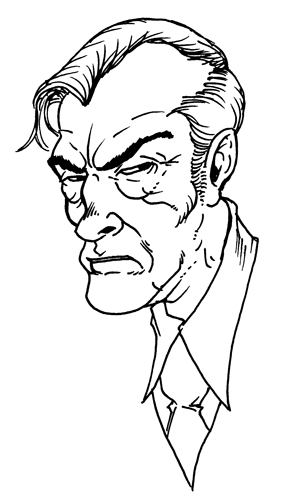 Over at Gutter Trash, Jason (my co-host) and I review Darwyn Cooke’s adaptation of the Richard Stark (aka Donald Westlake) novel The Hunter – a book that has been adapted to film twice before (three on a technicality). The most recent version is Mel Gibson’s Payback, which has a Director’s Cut version that is so vastly different, it might as well be a separate movie. Before that though, in 1967, was Point Blank starring Lee Marvin. Westlake never allowed anyone adapting his books to use the main character’s name, “Parker”. In Payback, his name is Porter; and in Point Blank, Lee Marvin’s character is Walker.

I watched Point Blank to gear up and supplement our review of The Hunter (Westlake allowed Cooke to use the name “Parker”, a first). Lee Marvin has such an interesting, grizzled look, I felt the need to draw him. His crazy eyebrows, the wispy gray receding hair, narrow eyes and deep heavy bags under his eyes. He was probably 45 or so when he made Point Blank but looked like he was 60. The man lived a hard a life and it showed, which made him such a great movie star.