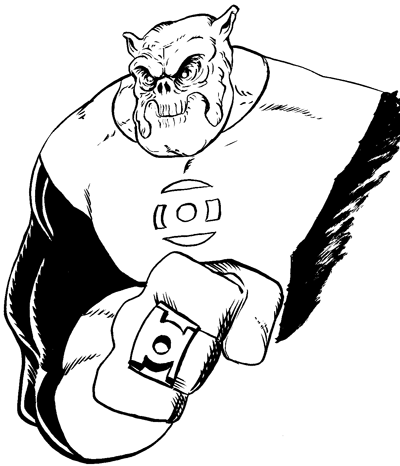 I watched the two-part series opener of the Green Lantern Animated series. The story was okay, I’m really not a fan of the Rainbow Coalition of Lanterns, and this seems to be really focused on that. The show seems to be light on “fun” and takes itself way too seriously. That said there were some surprisingly ultra dark moments in the show.

My biggest problem with it is the way it looks. It’s a CG animated show, which, if your name isn’t Pixar, you shouldn’t try this style of animation. It basically looks a couple levels above “ReBoot”, which is still not good. The worst thing about it though, is that it is trying to convert the Bruce Timm style of art and animation into 3-D CG, and it just doesn’t work. Timm’s style – a style he developed over years of work and combining his influences into one cohesive look, a style that is often imitated and never matched – works for 2-D and ink. It is so recognizable a style that to convert it into 3-D causes all the energy and greatness of it to disappear. It is very off-putting to watch that particular style of art and animation translated onto dead-eyed clunky mannequins with a shiny plastic coat painted on top.

I wish this show luck, but it’s not for me.