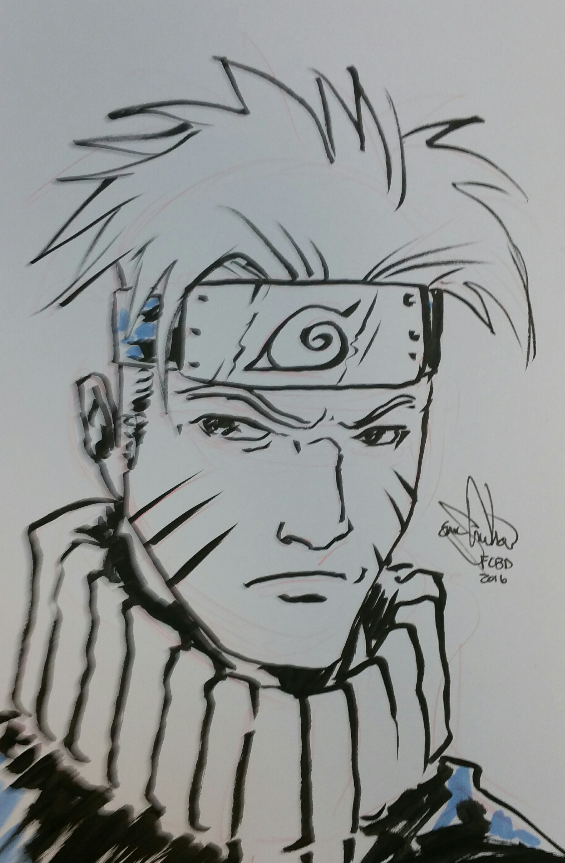 The next week and a half of posts will be the handful of sketches I remembered to get photos of during my Free Comic Book Day outing. Prior to Naruto, I had drawn a Loki, a Harley Quinn and a Mr. Miracle. It was after Mr. Miracle that I realized I should have been taking pictures. I still forgot throughout the day.

Today would qualify as a success, I think. I drew 29 sketches over the last two weeks to bring to Free Comic Book Day. I expected to come home with maybe 5-10 left. I expected to draw a couple of requests at the store.

All 29 pre-made sketches were gone in the first hour. From 9:45am to 2:00pm, I was drawing special requests. In 4 hours time, I drew 29 new sketches. I’m tired, I made and accepted no money, nor did I want to. If you’re gonna spend money at Free Comic Book Day at a comic shop, you should be spending that money at that shop. The comics are free to the customer, but not for the store.

Despite the hussle and the pressure of giving people the best drawings I could give them, not to mention so many in so little time, I had a fantastic day. Many thanks to Maverick’s Cards and Comics & staff for being gracious hosts and running a great event. And special thanks to all the customers and comic fans that came out and made the day even better. But I cannot give thanks enough to all the folks who grabbed one of the pre-made sketches, and the ones who patiently waited for me to draw their requests as I quietly held my panic and anxiety in check.