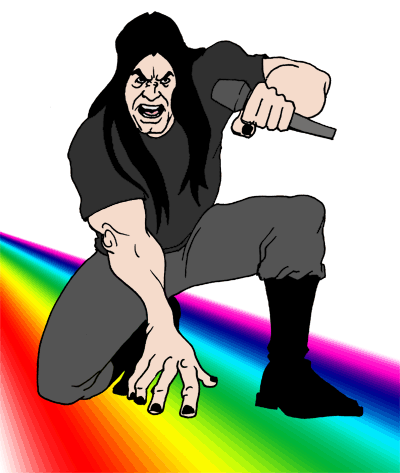 My friend Brian John Mitchell requested a sketch of Nathan Explosion of Metalocalypse/Dethklok fame, pissing on a rainbow. I don’t get it, I don’t approve, I drew a line. I don’t know why, I’ve drawn characters having violent diarrhea before. But I’m older, wiser, smarter, better looking than I was back then. So no go. But here’s Nathan Explosion on a rainbow.
Metalocalypse is one of the best animated comedies on Adult Swim, and I love it for so many reasons, one of which is, of course, the Metal. Brendon Small is an absolute genius, and the fact that has been able to turn a fifteen minute cartoon about a fictional death metal band into an actual touring, legitimate metal band is amazing. The “real” Dethklok has two albums out, and are all at once Death Metal, Pop Music and Comedy, and two of my favorite CDs I own.
I’m also looking forward to Small’s “solo” album.

I’ve always been impressed by Brendon Small due to how versatile a musician he is. I became a fan back during his Home Movies days, of which there was lots of music (the soundtrack that came with season 4 on DVD is one of my most favorite TV soundtracks). I’m not much for Death Metal overall, but I’m impressed with how Small has turned Dethklok into a ‘real’ band. (though I’d kill for a Snakes and Barrels album)
Metalocalypse has been all around amazing since its premier, the fact that it’s graduated from a 15 minute Adult-Swim toon, to a 30 minute toon since its last season was wonderful. It now stands shoulder to shoulder with Venture Brothers and Archer as one of the best crass animated shows on TV.