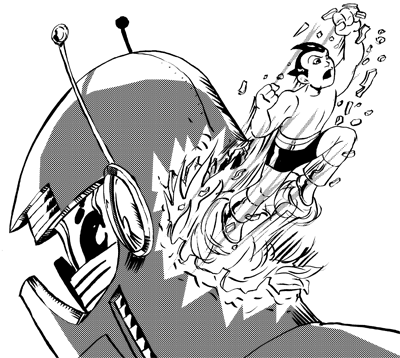 This fulfills a request for Jim Purcell, a guy who has been one of my biggest supporters for a few years now, despite the fact that I am constantly letting him down. We met online at the old Newsarama message boards, and we were both members of the weekly art group there.

I don’t know a thing about Astro Boy. I’ve never seen any incarnation of his cartoon, I’ve never read any of the manga or have seen the most recent CGI movie. The only thing I know about him is from the Frank Miller/Geoff Darrow homage/parody Big Guy and Rusty the Boy Robot. Which is to say, not a lot.