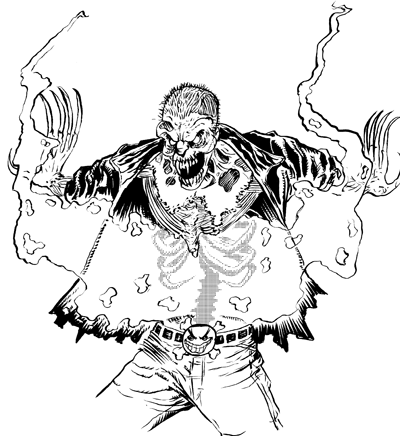 Recently for Gutter Trash, we (I) reviewed the worst comic that I’ve ever read, Evil Ernie: War of the Dead.

There is a small part of me that thinks of Evil Ernie as a neat concept, so I drew him as if I suddenly got the rights to the character. Smiley no longer talks/is sentient, nor is he the source of Ernie’s powers. Ernie may talk to Smiley, simply because he’s an insane zombie demon.

I would pretty much strip away everything else about Evil Ernie, I would keep a version of Lady Death (but not the same one) in his backstory, but get rid of evil psychologists and parents and magical sketching abilities, and most importantly, I’d get rid of Evil Ernie/Brian Pulido’s crazy mid-80s Metal hair.