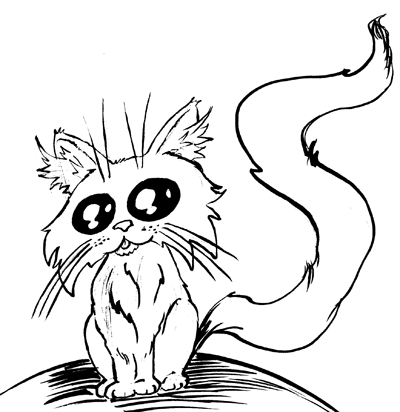 My ex-girlfriend had two cats when we started dating,* and they were preciously cute balls of fuzz named Sebastian and Shadow. Sebastian was a needy attention whore, so it was no trouble getting him to like me at all. The first time I was ever at her apartment, he jumped on my lap and started chewing on my beard. Shadow was not so easy and it took a long time for him to warm up to me, but when he did, I had a companion for the entirety of our relationship. However within those first few days of meeting Shadow, I gave him a nickname, and it has stuck ever since. I called him “Squee” based on the Johnny the Homicidal Maniac character. Mostly because he was a skittish, constantly frightened, timid, small cat, and when he made any noise, it sounded like a squee.
I wanted to draw something unbearably cute, and Squee was the first thing that came to mind. Obviously, not a likeness. More like the essence of Squee.
My ex and I are still incredibly good friends, but I miss not getting to see the kids.
*My ex eventually gained a third cat, an old, crotchety siamese named Mischief (also nicknamed Mogwai). Mogwai spent her first few months living with my ex hiding under the bed. Eventually she started coming out, and once we got over that barrier, she was like a little puppy (albiet an angry one) that followed me everywhere. Sadly, Mogwai passed on some months ago, and even though she was never technically my cat, the loss I felt was the same, and I miss her dearly.