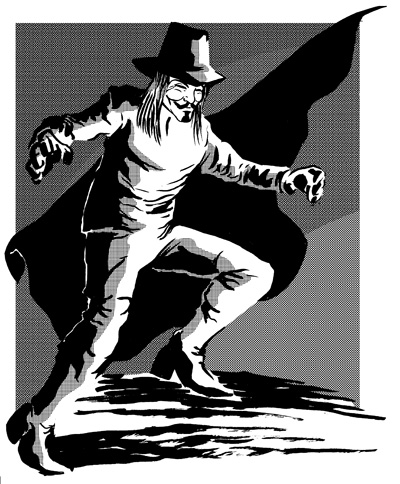 I am no longer a very political person. There was a point in time that I was, but I pretty much just stopped giving a crap. I vote, and that’s pretty much it. My politics currently can be summed up in this manner: You can insult and make fun of Herman Cain and criticize his politics and policies all you want. The second you insult his pizza, you have trouble.

I know that the film version of V for Vendetta has become a rallying point for some politically minded folks, and yeah, whatever, that’s fine. I think it’s absolutely 100% hilarious that Guy Fawkes masks have become a huge seller for these anarchist and Anonymous movements and that they continue to pump millions of dollars into Warner Bros. who own the rights to the image.

I also think it’s absolutely hilarious that throughout all of that, these people are essentially fucking Alan Moore in his financial hole (it’s in the taint). See, Alan Moore was promised all the rights to his books Watchmen and V for Vendetta once they go out of print, which will never happen if folks keep buying the books, movies and other related merch. Good job!

As for me, I don’t care. Alan Moore is a pompous windbag full of misdirected bearded rage.

That said, V for Vendetta is a far better book than Watchmen. I made that declaration when I read it the first time 13 years ago or so, and I still liked Watchmen back then. I tried reading Watchmen recently and found it unbearable. I read V again after the movie came out and it still held up.

So anyway, Remember Remember the 5th of November when I declared that your political views don’t matter the slightest, everyone is out for #1, those that claim they aren’t are the ones who are absolutely the most, and I welcome the upcoming race and class wars and the annihilation they will bring.