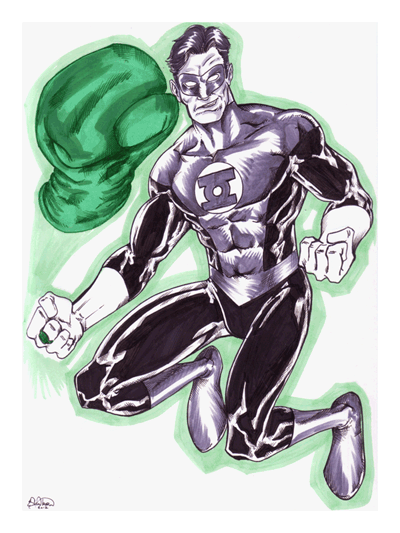 I know I’ve said I’ll never draw Hal Jordan, but money talks and for an extra 10 bucks, he’ll be my favoritist Green Lantern ever, too.

This is the first of a series of commissions for some asshole. He’s chipping in a little extra for the splash of color. I used regular ol’ blue pencil and light pencils for the layout, Copic Multiliners for inking the figure, a Staedtler Triplus color pen for the shape of the boxing glove, Copic gray sketch markers for the figure and Chartpak color markers for the greens.

The Chartpak markers are a set that I had to buy in art school, which are now 16 years old. When I graduated and moved, I wound up selling the markers, because I never thought I would use them again. I sold them to a woman who I would later wind up dating for 8 years, so it was almost like I still had them, but I never used them. Now that we are broken up, I am borrowing these markers from her. Most of the set is still intact and barely used.