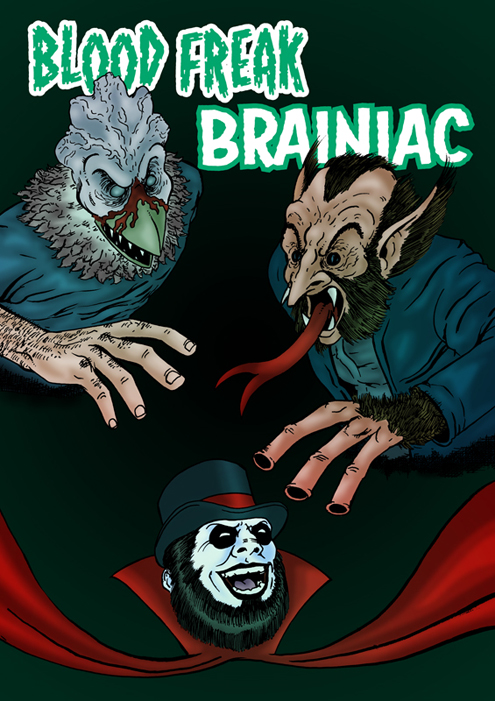 So a few years ago, I worked with my friend Matt Brassfield to help put out the tv series NEW SHOCK THEATER on DVD. I designed the trade dress and was one of 20 some illustrators to work on the covers. Shortly after the DVDs started coming out, the host of the series, Dr. Creep, passed away. I am honored that he got to see the work before he went, and am glad to have been a part of the project from the get-go. In addition to the design work, I also drew three of the covers, this being the final one. Also, it is the final episode of NEW SHOCK THEATER. There’s one more episode that is still unavailable, a lost episode. The hunt is on, but for now, the run of NEW SHOCK THEATER is complete.

This double feature episode contains the movies BLOOD FREAK and BRAINIAC – which has nothing to do with Superman. They are possibly the weirdest characters I’ve ever drawn (Blood Freak is a turkey-monster vampire who drinks the blood of hippie junkies). But it was a good feeling to draw the late, great Dr. Creep again. I’ve drawn him so much in the last few years, it feels like second nature.