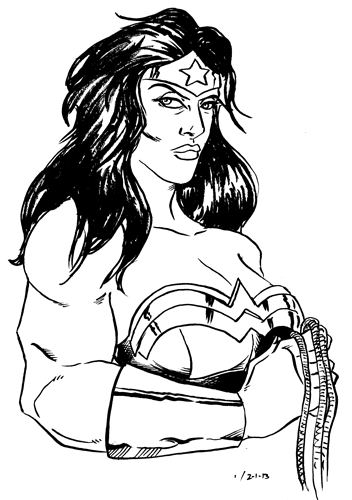 I realized today that it was exactly two years ago that I had started my initial Sketch-A-Day project. I worked on it for 369 (my brotha!) days straight and never missed a day. It was an incredibly productive year, if otherwise meaningless. It was tiring and hard, but I dug it. Most of all, the process got me out of a deep depression I had been in (Adam Hughes ruined my life. Read through the archives to find out all about it). When I stopped actively doing a sketch-a-day, I had big plans and was looking forward to taking my time on some art and maybe working on a more long-term project.

This last year has been the least productive of my life, and I am the laziest person I know.

I’m in that same funky depression I was in two years ago, but this time I don’t have Adam Hughes to blame. It’s all me, buddy.

So, I have a tumblr page where I re-post all my old art in chronological order. By absolute fucking coincidence, today’s post was my very first sketch-a-day drawing from two years ago. Exactly. Weird, right? But I had been thinking about that year. I kind of missed it. I was trying things and mostly failing, but I was trying. Drawing anything has been an absolute struggle in the past year, and it was because I was aimless.

Even though I would love to try making a comic or something, it’s an amorphous blob of an idea with a really loose goal, and that’s not a thing I’m good with. I am good with small goals. A drawing a day.

So I’m starting the sketch-a-day again. I need to up my output. The thing is, I know in my heart I need to think and work bigger, but I need to get off my ass first. So, this can’t just be random sketches. It will be, though, for a while. I’m still figuring it out right now.

But I know this: this isn’t only a year-long thing. I’m gonna try to keep going for as long as I can until I can figure out what I’m doing here.

Until that point, here are my rules (similar to the first go-round):

1) I will spend a minimum of 10 minutes on any sketch or drawing posted.

2) There will at least one color piece a week

As with the last time, I will take requests. Also I will be working on getting my current list of commissions done, and still accepting new commissions.