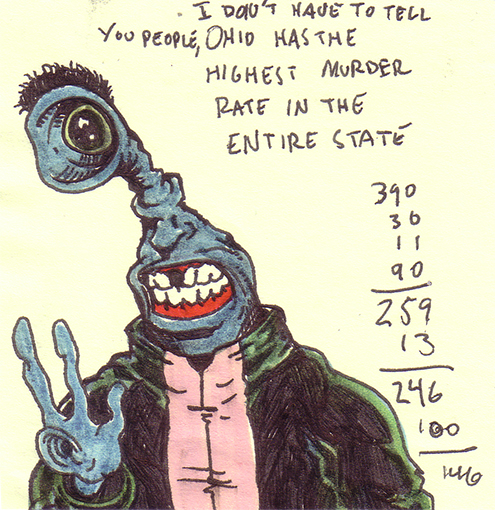 The quote on the post-it is from a fantastic podcast called Superego. Go find it. Also some budgeting math.

I have been watching Bate’s Motel. I will stop watching it in a few episodes, I think.

However, I’m in for the show Hannibal which just aired. I liked it. Mads Mikkelson (sp?) is pretty good as Dr. Lecter, though his accent is a bit thick and I’ve been having a hard time with my hearing lately. The only thing I don’t particularly like in this show is the portrayal of Will Graham. The actor is fine and the character itself is fine, but it’s not the Will Graham from Manhunter or Red Dragon. I get why – in order to seperate itself and be its own beast. I just don’t like the nervousness and twitchiness of the character presented.

So, I had this thought today.

I’m barely doing anything with my life. I do these sketch-a-day drawings, which so far is a mass of bored-time post-it notes. There’s nothing of substance here, but I’m okay with that. The thing is that I am the most unmotivated, procrastinaty person I know, and part of that stems from both a fear of failure and fear of success. I think I’m awful at what I do, but I also think I’m pretty great and it hurts me deeply when not everyone rushes here to heap massive amounts of praise upon my dumb post-it note sketches. I have three podcasts that I can’t figure out how to measure our listenership, but I’m pretty sure it’s at a zero for each. The shows are dumb and no one should listen and yet the shows are fucking great and everyone should listen and you wound me by not quoting us verbatim.

What I do is inconsequential and will not change any lives – mine most of all. The sketch-a-day and the podcasts – these are not the dreams I had as a kid or teenager or young adult. I don’t think I even want to go back to those dreams I had. I’m mostly okay with these things I’m doing. I could do them better and I could grow them bigger, but that’ll come in time. I think. I hope. I’m trying, somewhat. But the thing is – I’m doing this.

I’m posting a sketch a day. I’m doing multiple podcasts. These mean nothing and a lot of it is bad, but they are a part of me and my creative self and output. I can point to them and say “there.” I get better a little bit at a time, but the important thing is that I’m getting over the absolute fear of failure. I’m putting myself – my work and my name – out there for the public to consume, criticize and mostly ignore. And I’m mostly fine about it.

And that’s the thing. I have friends, believe it or not. Some of these friends have aspirations to creativty. I try to encourage them. I really do. They may not be the greatest artists or writers around, or even that I have known personally. But they’ll never know because they refuse to show the world what they’re doing, for whatever reasons. Unsure, unconfident, not ready to face the judgment and criticism of strangers. Lazy, unmotivated, procrastinaty. Fearful or success, fearful of failure. All the things I still go through on a daily basis.

I am the last person on earth who should be writing this. This is not me. I am not positive people. But I am trying. And I’d like my friends to try, too. Whatever their things – art, crafts, writing, some form of all of the above – I want to see the products of their minds, talents and skills. I want to see them grow and become better. I want them to join me out in the open with their talents and lets all help each other face all that other crap I’ve mentioned multiple times already. This is your private public shaming, folks who should know who they are and what they’ve done to deserve this. I’m tired of telling you privately you should try something and so I’m telling you publicly that you should try something.

That’s a little pep talk coming atcha at 11:33pm from the most cynical apathetic man in the world. How you like dem abbles?