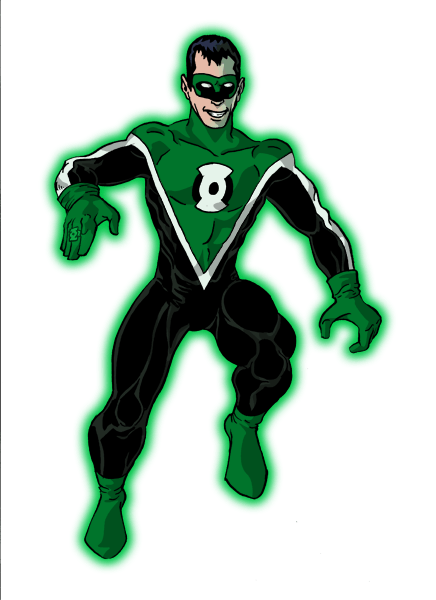 Kyle Rayner has a had a series of unfortunate costumes over the years. I for one always enjoyed his original costume with the plasticky gloves, boots and crab-mask. But pretty much everything he’s worn since then has been pretty bland or obnoxious. I can only blame Jim Lee (I did kind of like his “Ion” look with the full face-mask thingy).

If I was lazy, I’d have just given Kyle Guy Gardner’s costume and called it done, since that is my favorite Green Lantern and GL costume. But I’m just a little lazy, not full blown lazy. I gave him short gloves and boots since I don’t think I’ve ever seen a GL wear those. I’m a fan of the general look of the GL costumes and Kyle has always seemed to go against it so I brought it back to basics and still kept other elements of his costumes I’ve liked. The mask is a Hal-Jordany type, but the design evokes the crab-mask. The GL symbol is both Kyle’s original design and also white like his others have been.