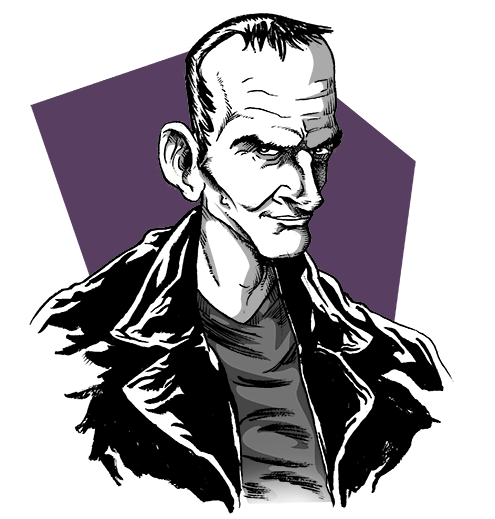 Today is the 50th anniversary of the premiere of Doctor Who, so I decided to pay homage to my first Doctor. Sorta. I’m pretty sure when I was a kid, I stumbled upon an old Doctor Who episode on PBS, mostly likely the 4th Doctor – Tom Baker – with the afro and scarf. And the cardboard sets and I’m pretty sure I saw a wheeled trashcan with a plunger sticking out of it. Even as a child I wrote it off as crap. Flash forward to 1996 and the Fox network is advertising its Doctor Who TV movie. A friend of mine was apparently really excited for this thing, so I out of infectiousness, I watched it. It was okay. This was the Paul McGann 8th Doctor. The movie did not do a very good job of establishing what it wanted to be, especially to folks who had no context of a Doctor Who beyond cheap sets and old, bad PBS programming. I remember being intrigued enough to wanting to watch the regular series should it have manifested, but it did not. I also only ever really remembered that Eric Roberts and Will Sasso were in it. I enjoy a Will Sasso. But whenever I’d see anything else with Paul McGann in it, I’d say “Hey it’s that Doctor Who guy”. I’ve recently rewatched the TV movie and it’s pretty enjoyable now that I’m more familiar with the history and the character.
So the new series starts in 2005, I believe. I immediately dismiss it. I wind up actually watching an episode of it at some point on either the Sci-Fi Channel (SyFy) or PBS and it did nothing for me. So I continued to dismiss it. Then sometime in 2011, I give in. All of my friends whom I trust their tastes in television and movies just won’t shut the fuck up about Doctor Who. So I let go. But I decide to start from the new beginning. I don’t dislike it, as I thought I might. It’s certainly engaging and watchable. The special effects are crap, but the characters are likeable and relatable, the stories are fine. And then I hit the episode Father’s Day. Jesus Christ. Dad stuff. I break. I’m in for the long haul. This show is fantastic. The following episode is The Empty Child two-parter, which as it turns out is the episode I accidentally watched some years earlier. It turns out, that episode is amazing. In fact, I go back and rewatch the previous episodes. I love this show. It’s great and now I’m pissed that no one ever told me how great it was. But then, 4 episodes later, Eccleston (whom I was a fan of from movies and whatnot) was out.
FUCK!
Well, David Tennant turned out pretty great, and while I’ve never been as on board with Matt Giant Head No Eyebrows Smith, he’s alright too. But Christopher Eccleston is still my favorite incarnation of The Doctor (though I still have a soft spot for McGann, too). It’s a shame his tenure is so short (again, poor McGann beats him on that too) and that he apparently has so much disgust for the franchise and his time on it. But still. Nine all the way.