Believe it, or not. 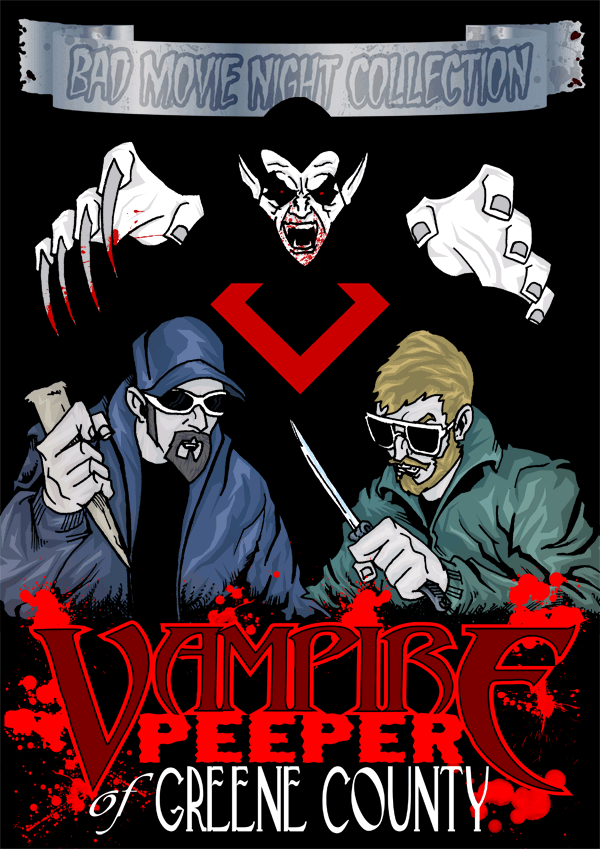 A friend of mine (Matt Brassfield of Bloodline Video) asked if I’d draw a cover for a DVD he was putting out, Vampire Peeper of Greene County – a part of his “Bad Movie Night Collection” of videos. Because I’m a pussy who has a hard time saying “no”, I agreed. Then it took him over a month to get me photos of the characters, or a copy of the movie. When he finally did, I only had the weekend to get a full-color illustration – with logo design and banner design – done.

The vampire in the movie is a cheap child’s Dracula mask, with Freddy Krueger glove and Superman hoodie. Who is also played by the same guy playing the “hero” of the film. Obviously, I made the vamp a little more menacing than a plastic mask, I made the claws real, and the Superman symbol makes a nice ‘V’ for vampire. The two “heroes” of the film played by Matt Hoffman (the character with the ballcap) and Adam Eckley (the other guy) were the only memorable characters with any dialogue, so they get the cover treatment. My friends Jason and Pat were also in the movie, but fuck those guys.

The movie itself, kinda fun. It’s definitely bad on every possible level, but I laughed out loud a few times, chuckled throughout. It’s entirely improvised, so check out the Bloodline Video website to support local (to me) independent movies.