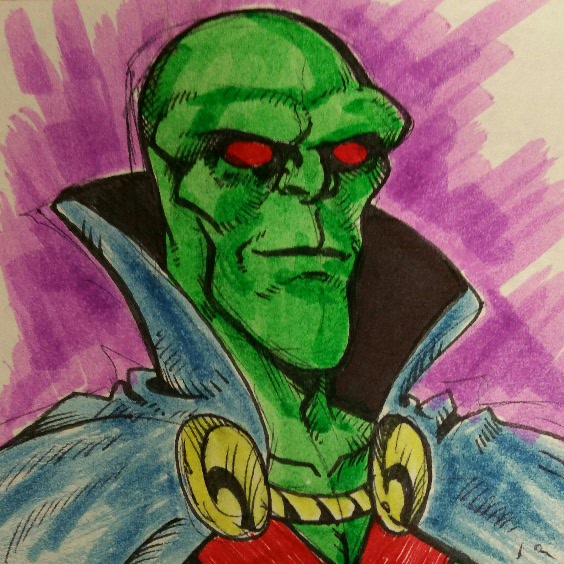 After last night’s episode of Supergirl, I decided to draw my favorite martian, J’onn J’onzz. I’m iffy on the actual Supergirl show, it’s got a lot of high points, but the low ones really, really grate on me. But last night, they raised their game and pulled out some awesome stops. Between a pretty good character arc for both Supergirl/Kara (whose name gets pronounced differently by EVERY character. It’s one thing if Ally McBeal is mispronouncing her name, because she plays a character who would do so callously, but, seriously, no one pronounces it the same. Kara. There’s two ways to go with that, not nine) and MOTHERFUCKING JEMM, SON OF SATURN, the Supergirl team pulled off an all-around solid episode. I will still never ever get behind studly buff hot fuckable Jimmy Olsen. That’s just never gonna happen. Not that Jimmy can’t be a sex symbol – he can. Grant Morrison pulled it off in All-Star Superman. But his sexy Jimmy was still Jimmy, at his core. Supergirl’s Jimmy is sexy in every cliche sexy way, which is not Jimmy Olsen. Also, for what should be a great feminist show, our leading lady is soooo reliant on the men around her. Jimmy, Guy who fills the more accurate Jimmy role, and of course the “cousin”. She never takes a stand, never makes a move without first conferring with one of her male compatriots and gets the validation she needs, or asking “What Would Clark Do?”. It’s… distracting.
That said, she comes into her own a little in the episode, but the best and worst part comes from the end-of-episode reveal: Martian Manhunter! In episode one, we’re introduced to Hank Henshaw, and he’s a bit shady. Which is a bit of no-duh, as in the comics, he’s the evil Cyborg Superman. We get hints of his shadiness throughout the series so far, but in a TWIST! it’s revealed that Henshaw is really dead, and J’onn J’onzz has assumed his identity. This. Is. Awesome.
M.M. is one of the characters that, for reasons I can’t put into words completely, is high on my favorites list. I dunno why, other than he’s awesome. He’s like Superman, but more sympathetic, with more powers and is awesome. People shit on his weakness to fire like it’s a massive flaw. Hey, you know what? Your weakness is also fire. Mine too. And Batman’s. So fuck yourself and light yourself ablaze.
However, here in his third live-action outing as a character (the failed Justice League TV movie from the 90s, Smallville) he is once again relegated to not only just a supporting player, but for the second time in a row, a supporting player to a Kryptonian. Dude deserves his own thing. For realsies. But, for now, I’m excited to see where things go with him on this show.