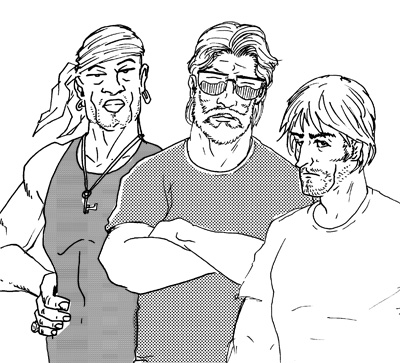 So via Facebook and in the real world, several of my friends (many of them female) have gone on and on about how awesome the show True Blood is. To be honest, my love of vampires only goes so far, and the genre of brooding romantic vampires can all go fuck off. While I was certainly a fan of the show Angel, I never got into Buffy. Watching Angel was more like watching a Batman TV show, which I am 100% in support of. Everyone else, if you want to show me vampires, I prefer the crazy mutant vampire-killing vampires of Blade 2. God I love that movie.

Anyhoo. So these folks who kept telling me to watch True Blood, sold me on it with three little words: Anna Paquin naked. I like an Anna Paquin. One of my very few celebrity crushes. But the problem was, it’s still True Blood, and I’m certainly not going to waste a Netflix shipment on it, or the money spent at my local brick’n’mortar video store (plus 90% of their DVDs are scratched to shit and won’t play. Thanks, FAMILY VIDEO!). So my friend Stephanie stepped up and let me borrow her copy of Season 1, in exchange for borrowing S1 of Dexter.

She got the better end of the deal.

It’s not a terrible show, but it’s just okay. It’s engaging enough, and as I kinda alluded to in the Get Smart post, I like having seasons of TV shows on DVD when I draw. It’s a pleasing enough show that I can keep on and only marginally pay attention to.

The show’s biggest problem is that I really cannot give enough of a flying fuck about any of the main characters, particularly any of the vampire characters. They’re pretty much all awful. What saves the show for me is the secondary and the background characters. They have tons of personality and a degree of fun.

The three characters I drew are Lafayette, Terry and Sam, possibly the three biggest redeeming qualities of True Blood. I would totally support a spin-off show with those three guys. Maybe they’d drive around America, solving mysteries and fighting crime. Maybe they’d all move to L.A. to try to start a band. I don’t know, but I’d totally fuckin’ watch it.

All that said, I’m mostly done with Season 2 now, and it’s a metric fuck ton better than S1, but it’s still mostly bad and filled with horrible, cardboard main characters. The background characters are all awesome, though, and have really shined. And also, not nearly enough of Anna Paquin naked. So screw you. I mean that in the best way possible.