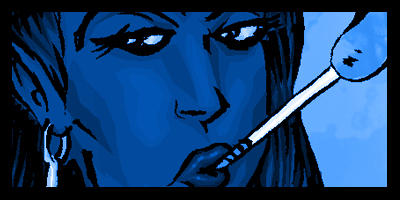 I don’t know anything about this character, but it was a request from my closest friend in the entire world, so I was more than happy to oblige. Once again, I am faced with my limitations on drawing female characters, and this is something I need to work on, particularly to try not to make them all super-busty vixens. Luckily Mercy Sparx is a super-busty vixen, so yay me.

In my reference search for this drawing, I wound up downloading the free sampler issue of Mercy Sparx on Comixology for my phone. I gotta say that I do not enjoy reading comics on my phone, but I can see the general appeal for digital comics.