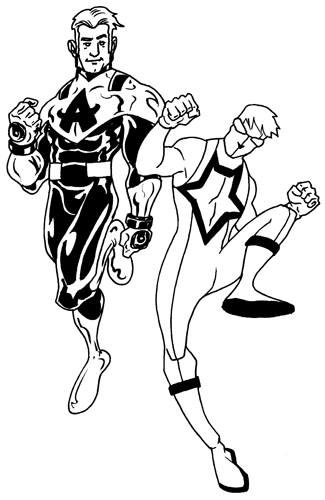 If I remember correctly, today is the birthday of Bruce O. Hughes. Bruce and I met in art school in 1998, around the time we were graduating. For no real reason, up until that point, I disliked the man. Just me and my long string of anti-social asshole behavior. When we finally bonded (over Bruce Campbell, Green Lantern, X-Men, Chris Bachalo and Shade the Changing Man), Bruce quickly became one of my closest friends. In fact, I always considered him more of a brother to me than my actual brothers.

Bruce is easily the funniest human being on the planet and a ball of creative energy that can’t be matched by anyone, with ideas constantly pouring out of him like water. He was my best friend, and we worked together, and were trying to take on the world of entertainment by any means necessary.

We made a ton of comics, we joked constantly, we (along with some other folks – Andy, Jay, Rick) made a movie, we planned on even doing some sort of musical thing. But comics were the absolute ultimate plan for us.

Bruce is also the finest artist I’ve ever met or worked with or been around, and I’ve been associated with some crazily talented folks, all of whom have my utmost respect and envy, but none have ever been better than Bruce.

Over at Ok, PANIC!, I constantly joke about how each topic isn’t a competition – but how it’s totally a competition. Even though we were partners and working together, it always felt like a competition. I’m not sure if Bruce ever felt that way, but I did, and it started to take it’s toll. I’ve also joked that for the past year, Adam Hughes (no relation) ruined my life. That comes from purchasing his art book and being so floored by the quality of his work, that I never wanted to draw again. Bruce, on occasion, would make me feel that way when I would look at his art. He also made me strive to want to get better and improve my work and constantly change what I was doing.

Bruce and I are a lot alike in a lot of ways, first and foremost in that we are stubborn assholes who can’t express emotions properly. The constant frustration, the all-in-my-head competition, the disillusionment I felt at our inability to get our work noticed – all these things began to take it’s toll on me. I don’t think I can express how frustrating it was to be confronted with the fact that my dream of being a comic artist or writer – a dream that I have had since I was 9 years old – was crumbling around me.

And it was all me, all in my mind. I know that, and I realize that. I’m not energetic, I don’t have a lot of creativity in me, I am not clever, and I don’t have life experiences. I am a recluse and a dick. Seeing Bruce thrive under pressure and never giving up on his dream – I don’t know. It bothered me.

I had to sabotage it, I had to give up. And when I did, Bruce hassled me and harassed me. He was well-meaning, and only wanted me to strive for my dreams again. He knew I loved comics, he just wanted me to love them more, and want to continue to make them. I just didn’t have it in me. I pretended. I faked it, but the passion, the energy, the creativity, was gone.

And like a married couple, the tics and quirks of the preceding 10 years, it got to me. And without a word, without explanation, I cut off communication, I severed our friendship.

I ruined my own life. I ruined possibly the best friendship I’d ever had.

Then I got bitter. And angry.

Asshole isn’t big enough to describe what I am.

That was in 2008. I still continued to trick myself into thinking I wanted to do comics – and occasionally, I still do. I thought I wanted to do them on my own, I thought Bruce was keeping my creativity down, and I blamed him for my own fears of success and failure. I blamed him for clipping my creative wings, and this birdy gotta fly. I got tired of all our stupid disagreements and shut myself off to my brother, and I fucked him over – unintentionally – but I did, and in my own twisted, angry bullshit, I thought he was getting what he deserved.

No one deserves that.

Over three years have passed since we last spoke with each other. Bruce has gone on to create and publish a comic called Clobber Vance which is pure, unadulterated Bruce, the kinda thing I would have gotten mad at if he presented it to me as a book to work on together, and then more mad if he did it himself.

He’s a father now, he hosts a podcast called The Break-Ins with another cartoonist, and he’s only gotten better as an artist over the years, and he’s forging his own path, which is awesome. Even during the lowest points of our disassociation, I may have (unjustly) convinced myself that Bruce was the cause of all that was wrong in my life (he’s not, it’s me), but I was always going to respect his work and his art. He’s the me I wish I was more like.

We have, in recent months, been in contact, of sorts. He posts comments on this blog, and we have emailed each other a couple of times. Unless this post dredges up some bullshit and reopens wounds, I’m hoping that in the near future we can start trying to be friends again. I’m certainly looking forward to eating Skyline with him at some point, and possibly begging his wife for forgiveness and maybe meeting his son.

In honor of Bruce’s birthday, and letting bygones be buried by hatchets under a bridge of water, I drew a couple of characters that I haven’t drawn in many years. Jack Astro and Grey Wolf were the stars of our comic Justice, Nevada it was our superhero parody comic, and one of my favorite things we created together. We never did much with them, but that’s because it was my book to draw. Read this entire post again, and also this entire blog to figure out why that happened.

Check out Bruce’s blog at bruceohughes.com, see all the awesome he’s been doing for the past three years, and you can also read pretty much every comic we ever worked on together too. I believe that is also where he hosts his podcast from, so check that out as well.