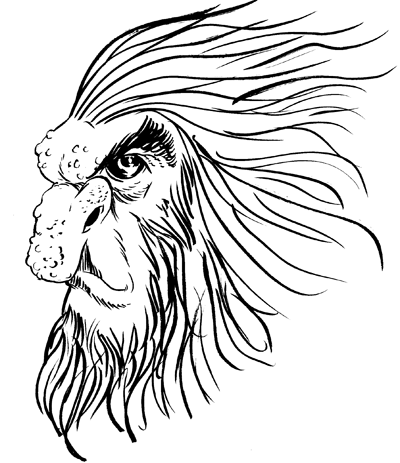 I recently watched the movie Trollhunter. It was a lot of fun, and I look forward to watching it again in its native language, with subtitles. But I had trolls on the brain, and recently recovered my brush pen from what I thought was a certain doom.

I had run out of ink, and following advice I had read online, decided to refill it with a different waterproof india ink using a converter. Apparently my first choice of ink was not good. It was really still and hard to use or make brush strokes with. So I washed it out, and tried again, but this caused the brush to now have a gray wash tone to it, which was unacceptable (though I used it on the Shade the Changing Man sketch from a few days ago). So finally, I washed it out again and let the components sit for three days, occasionally replacing the hot soapy water. Then I let the pen dry for about two days before touching it. The brush still was leaving washed out gray strokes when I was testing it’s dryness. Finally, when it seemed dry enough, I refilled the converter with a different ink.

The first few strokes were kind of a watery dark gray, but soon after, we achieved blackness, and my brush pen was saved. Then I drew a crappy troll sketch. The end.