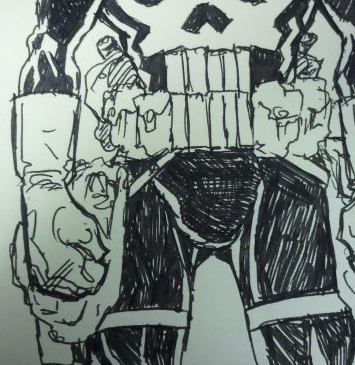 Post-it doodle, camera-phone “scan”. Next thing you know I’ll be taking bathroom mirror self-portraits and throwing gang signs.
3/17/13 Addendum:
Lovely Molly. Slow-paced horror movie from one of the guys whut brung you The Blair Witch Project. It’s not a bad movie, but I didn’t like it. I found the main characters to all be unlikeable from the jump, which hurts when you’re supposed to feel bad when bad things start happening.
The Dunwich Horror. Weird psychedelic horror movie starring a wild-eyed, jew-fro’d, porn-stached Dean Stockwell and based on an HP Lovecraft story. There are worse ways to kill an hour and a half.
Dirty Work. Apparently something was up with Norm Macdonald yesterday, but I didn’t know a thing about it until after I’d already watched this movie directed by Bob Saget. It was funny and it follows the formula of every Adam Sandler SNL movie ever made.
Machete Maidens. Documentary about exploitation and grindhouse movies that were made in the Philippines throughout the 70s and 80s. Enjoyable, but made me want to watch a documentary solely about Roger Corman.
If there was ever a week where I can’t watch a movie, it’ll be this one. There’s also the possibility this is the week I forget to draw something one day. I might have to start taking a sketchbook to the bathroom with me. For poopin’. And sketchin’. While poopin’.
On the other hand though, I’ll probably be working ’til 1 or 2 in the morning for the next few days (and getting up at 5 for real work), so it might still happen. All I know is that I’m looking forward to next Sunday so that I can sleep.