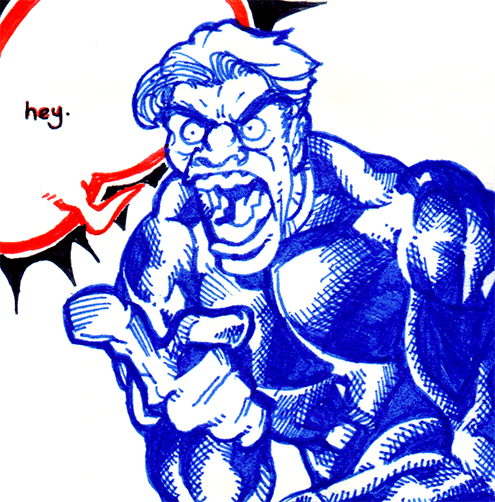 Once again, I was house/cat-sitting for my folks. Once again, cable TV only disappoints. At least the next time I housesit (a couple weeks from now), it’ll be for a whole week, so I can bring my Netflix delivery system (PS3).
I did wind up watching a fairly decent movie on the SyFy (ugh) Channel called My Soul to Take, a Wes Craven movie from a few years ago that got horrible reviews. But I enjoyed it. I also caught about 40 minutes of The House Bunny aka Boobs: The Movie. It was on and there were boobs. I watched part of an episode of ALF, the last half hour of The Karate Kid III (in which I realized I’d never actually seen that one) and ultimately, the newest episode of The Venture Bros. which sort of made it all worthwhile.
I did read Superman Unchained, though. It was okay. I don’t know what I was hoping for. I think it was the art that kept me from enjoying it fully. I’m not a fan of Jim Lee’s work, and this comic was pretty much a showcase of all things that I kinda find repugnant about it. Especially the ridiculous four-page fold-out poster panel. Both sides are just a blurry mess of lines and “kewl”. And once I removed the glue that held the pages together to unfold this unseemly mess, I was pretty much too exhausted to be impressed by whatever it was Jim Lee thought he was drawing to try to impress me that warranted a four-page fold-out poster panel. Again – it was mostly just scratchy lines and words that I couldn’t read because they were hidden by the piece of cardstock that the four-page fold-out poster panel was glued to in order to hold the thing in the book.
Also, I guess I was really hoping this was going to be an adaptation of Django Unchained starring Superman.
And Superman still doesn’t look right with a high-collar and armored glowy lines and without red undies and the cape that attaches to nothing.
You know what? Fuck this book.