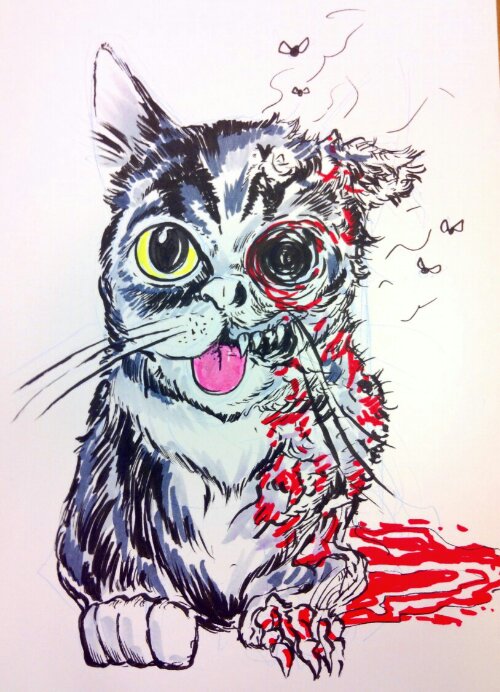 A long time ago, my girlfriend and I were sitting down to have dinner. At the time I worked ’til midnight most nights and wouldn’t get home until 12:30 or so. I had picked up something and we were gonna settle into a night of food and video games and whatever else. One of her cats came up to me and I ran my hand down it’s back. My hand was wet. But it was a different kind of wet. I looked at my palm and saw that it, and the cat, was covered in shit

My girlfriend grabbed the cat and went to lock him in the bathroom in preparation for giving him a bath. We were also going to check to see how much shit he dragged through the apartment. However, once in the bathroom, we heard a faint crying. The other cat had escaped out of the bathroom window and was now stuck on the roof of our building. We closed the bathroom window and locked shit-stain cat in the bathroom. Then, after furiously washing our hands, I helped my girlfriend onto the roof via the kitchen window. Getting there was okay, but getting back in was another story. It was actually closer from the roof the ground than it was to get back inside. So I went out to the ground area to catch both my girlfriend and the roof-cat and help them down so we could get back inside. It was still a treacherous drop without help, and she was busy holding a petrified squirming cat. So I ran out the door, and then heard it lock behind me.

So, we were all stuck outside now.

Luckily, I still had my car keys, and at 1:30 in the morning, drove to my parent’s house to get the set of spare apartment keys so that I could get back into the apartment and rescue my girlfriend and the cat so that we could give the other shit-covered cat a bath and so we could finally eat our dinner which at this point was sitting on a table for about an hour.

And that is the closest thing that any cat I’ve ever known well has done to be even remotely worthy of being an internet-famous cat.

So I’m at HorrorHound, and this girl comes up to our table and asks for a sketch of a character from the movie Sleepaway Camp (spoiler, Angela has a penis). In the middle of telling me who the character is, she stops. She asks instead if I can draw a zombified animal. The thought of drawing animals scares the crap outta me. But I also like money and she seems willing to spend it. So I says yes. And she shows me a picture of Li’l Bub. I had never heard of Li’l Bub before that day. She tells me a little bit about her and I agree to draw a zombified, rotting, gored up version of her. But still retaining the inherent cuteness of Li’l Bub, who is of course, freakin’ adorable. So, yeah, I’m a fan since drawing one of the weirdest things I’ve ever drawn for money.

(I did not know that Li’l Bub didn’t have any teeth when drawing this, but, y’know, monsters).

The girl thought the sketch was hilarious and seemed pleased.