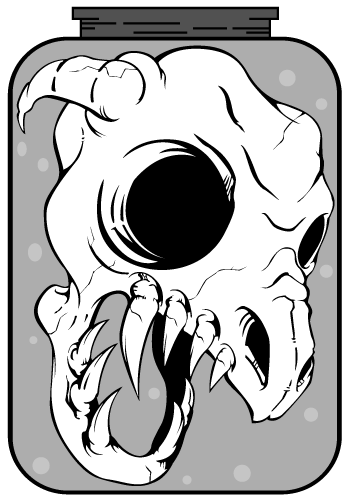 My last HorrorHound Weekend Indianapolis “sketch”. I put quotes around it, because it’s not really a sketch. It is a logo.

Asylum Artwork & Oddities were the booth right across from the Pungent Basement Art booth (Kurt Dinse & me). They were very nice people and they certainly drew a crowd with their dead animals stuffed in jars and other horrifying gross things. Which also included raccoon penis bones – which apparently, raccoons have penis bones. Who knew?

So anyhoosy, I took a picture of their booth and sent it to my bestie and jokingly asked if she wanted me to pick up something. Not jokingly, she said yes.

It was a short matter of time later when the proprietor of Asylum Artwork & Oddities came over and wondered if I might be able to create a logo for them. I enjoy money and drawing and said yes. And then she seemed to be pleasantly upset that I did do not charge a lot of money for my work (commissions always available).

So I drew the logo. She seemed to like it. She was a little disappointed that I could not add the name of her store to the logo, but that is something I usually do via computer as I am absolute crap at hand-drawing text. So I made her a deal. I would recreate the logo when I got home (which is what you see above) and add the company name (still to come) if she would be willing to trade for merchandise. She said yes, and then I was able to bring home to my friend a dead bat in a jar and a mummified squirrel skull, and everyone was happy!

Except for the dead bat and squirrel.

Thanks for putting up with all my HorrorHound nonsense! Tomorrow I’ll return you to your regularly scheduled post-it doodle bullshit.