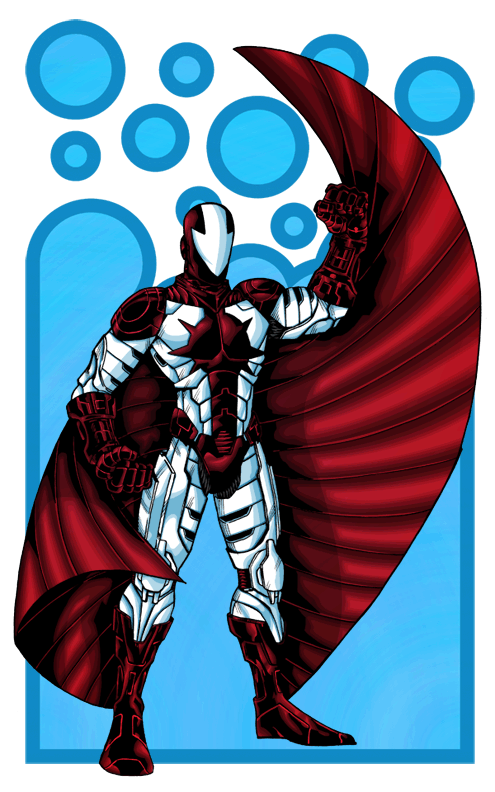 My latest and penultimate piece for The Official Handbook to the Marvel Universe Reduxe Edition is now up.

I have drawn Stingray once before, but this time, I decided to play up the Iron Man aspect of the fact that the character is basically an undersea Iron Man. Even though I always prefer a clean, simple superhero costume, and there is no better Iron Man suit than the Ditko Iron Man suit, I went nuts on the plating and segments and dood-dads and hoo-hahs. Still, it’s such a nice original outfit, it’s hard to completely screw it up. But I’m sure I tried my damndest.

For some reason, the entry on OHOTMU is pasted on the original bio page for the character. I don’t know why. I’ve seen other entries like that, and just assumed the artist wanted it that way. I did not particularly want that, as my other entries were left alone. It’s supposed to be a companion piece to my earlier Tigershark entry (underwater and whatnot). So, I’m posting the untouched version. Not that I’m trying to be some sort of art purist and I definitely shouldn’t let it bother me, and I’m definitely not saying that I’m so great that “MY ART” should be “PRISTINE”, but it’s just weird that I wasn’t even asked. I dunno. I’m still really proud to be participating in this project and surrounded by an absolute ton of fantastic artists who are pretty much way better than me in every way.

I’ve got one more OHOTMU piece in the works, and it’s a doozy.

Until then, here’s my OHOTMU archive and, honestly, you should just really check out the entire blog ‘cuz it’s awesome.