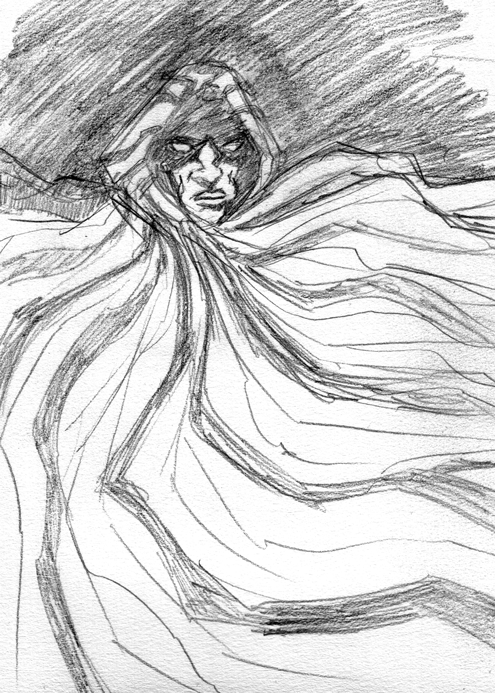 I am having an excellent past few days. Part of that was meeting up with some friends of mine to get some steak last night. I’m not usually one to go out on a Friday night, but I’m also not one to turn down steak. So, when the hostess told me there was going to be a 45 minute wait, I took the beeper buzzer thingy, went to my car – where I am trying my hardest to keep a sketchbook and pencil or pen in my glove box – and doodled this while waiting. I have read only a handful of comics with Cloak & Dagger, and most of those have been the Ultimate versions. I did read a one-shot where for some reason, they were X-Men.

So while my weekend is going well, someone else’s most likely isn’t going as well.

Bill Mantlo is the creator of Cloak & Dagger. He is also the creator of Rocket Raccoon, who will soon be featured in a major motion picture and reap a ton of profits for Marvel Comics and Disney. Back in 1992, Mantlo was in a tragic car accident that left him with severe brain trauma. You can read all about his life here, but it is a tough thing to get through. Despite the amount of money Marvel/Disney will be gaining from Mantlo’s creation and imagination, he won’t be seeing any of that either. Sure, it’s true that there’s nowhere in his old contracts that states he should get anything for multi-media uses of his creations – work for hire creations that he does not own any rights to – but that doesn’t make it right. I’m a cynic, and I know Marvel won’t be doing anything to help Mantlo out. They haven’t yet, and honestly, they don’t owe him anything. But we’re all humans, and we’re all comic fans. Mantlo’s lengthy list of credits surely include something that you’ve enjoyed or even loved.

That said, consider donating some money to the Bill Mantlo Support Fund, and I’m sure every little bit helps. I will be donating 10 bucks, basically the cost of the ticket I’ll buy to G.o.G. It’s not a ton, but it’s all I can afford, and it can’t hurt.