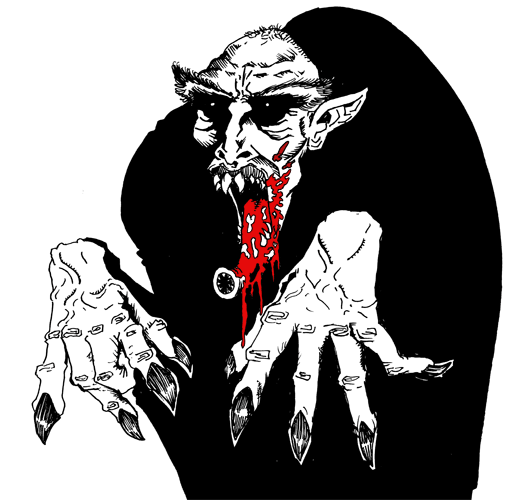 A little late, was having dinner with my parents. Anyhoo.

Unless their name is Dracula, and they’re played by Gary Oldman or Bela Lugosi, attractive charming vampires can blow it out their ass. I love vampires as freakish, dirty, messy, sloppy motherfuckers who are, y’know, actually frightening. As much as I hate Steve Niles’ work, at least he had the decency to take that direction with 30 Days of way too fucking much hackery. However, with the popularity of crap like Twilight (the trailer to the movie looks fucking terrible, and I found out that my 13 year old nephew is obsessed with it – it has be shitty), it looks like pretty, vapid, toothless vampires ain’t goin’ away anytime soon.

So I based this nasty motherfucker on Orlok from the film Nosferatu, originally played by actor Max Schreck (also the name of Christopher Walken’s character in Batman Returns. Schreck himself would be portrayed – kinda – by Willem Dafoe in the criminally underrated Shadow of the Vampire). I decided to give this guy the leech/sucker tongue thing… just because.

My brother’s visiting tomorrow. I love him, wanna see him, but it really kinda fucks up my plans for Saturday (reading a book). I’ll just have to power-read through it on Sunday.