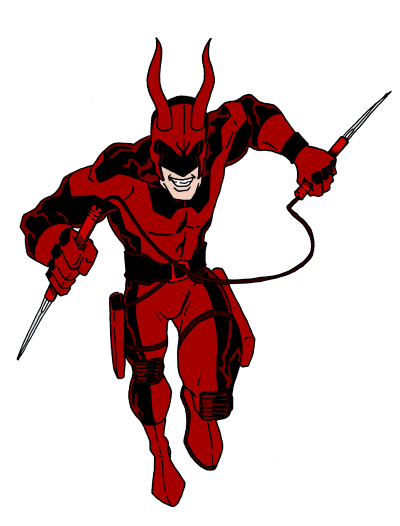 Inspired by my Crime Syndicate drawings, I decided to make up Crime Syndicate versions of Marvel characters. I’ve only got two so far, and I also plan on finishing out the DC CSA line-up. And also recolor them in the future when I have more time.

So here we have The Devil. Young Matt Murdock saw the old man crossing the street when the truck full of radioactive waste was barreling down the street. Matt pushed the old man in front of the truck because he thought it would be funny and wanted to see what happened when the old man got hit. However, the radioactive waste splashed in Matt’s eyes and blinded him. He soon discovered that the waste that removed his sight enhanced his other senses and abilities to superhuman levels. Using these abilities, he gained work with his father as an enforcer in the mob and fixed boxing matches. When not helping run his father’s racket, he studied the law and went to law school, becoming the consigliere to the Kingpin, Jonah Jameson. Secretly, as The Devil of Hell’s Kitchen, Murdock is actively bringing down the Kingpin’s organization – to take it over.

Or something. Man, I’m tired.