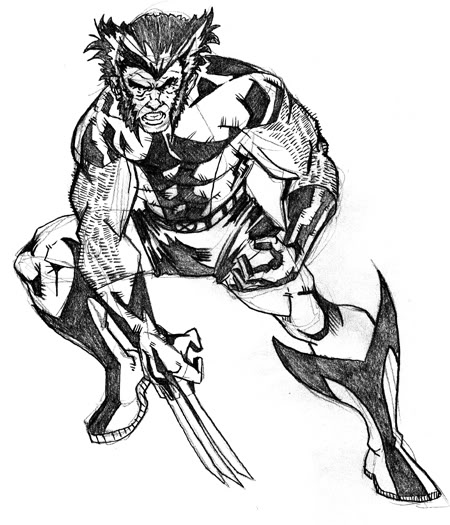 So despite the fact that I can say (not-so-proudly) I am a Wolverine fan, I have no intention of seeing X-Men Origins: Wolverine. To make up for that, here’s a pencil drawing I did that was probably the only decent Wolverine sketch I’ve ever done.

That said, I did spend my money on the new Star Trek, a franchise I can easily say that I am not a fan of. I have seen most of the films, though, and enjoyed quite a few of them. The new Trek blows ’em all away. It’s just a quickly paced, fun, action romp with enough emotional weight and depth to keep you engaged when shit’s not blowin’ up. Zachary Quinto as Spock shows infinitely more range as an actor than his role as Sylar on Heroes (to be fair, everything about Heroes is incredibly one-note). The rest of the major crew is mostly cast as comic relief (with the exception of Uhura), but each gets a dramatic moment to shine as well. Chris Pine as Kirk comes off as an incredible asshole, and in any other world, this would hurt him. However in the rigid command of Starfleet, Asshole Kirk becomes the Everyman, and the most relatable character, something most of the other Trek movies and shows are missing. Leonard Nimoy’s appearance as Old Spock makes sense within the logic of the movie, but it still felt uncomfortable. However, the worst part of the film is when Young Kirk steals a classic convertible and blasts The Beastie Boys and uses some cellphone technology (Buy Nokia!) that isn’t all that far away from what we’ve got now. The whole scene does help build up Kirk as Asshole Everyman, but still feels… shallow. The direction is pretty standard, but owes quite a bit to both Star Wars and Firefly in it’s action sequences and settings. And hey, the Cloverfield monster shows up!

But still, money well spent, the movie is incredibly fun, and I would definitely recommend it to non-Trek fans. As for diehard Trek fans? I dunno. The majority of the folks in the theater (most of whom I can assume were Trekkies) applauded at the end and at certain key moments in the movie, but as I was leaving I was still hearing some folks bitch about continuity errors and things they “got wrong”. So who knows?

I was going to pick this as the next movie pick for my podcast Gutter Trash, but my local nerd crew decided that we all needed to see it opening night. And for once, my superpowers didn’t kick in, and I didn’t have idiots surrounding me in the theater. However I did get there early, to minimize the damage. One of our group, though, couldn’t get in due to the movie being sold out, however, right next to my friend was an empty seat, and there were a whole bunch of empty seats toward the front of the theater as well. I don’t get it.