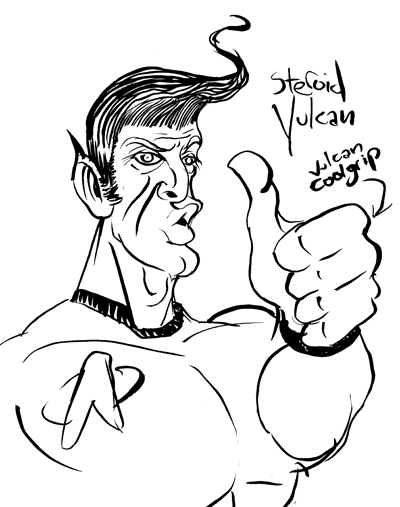 For those that don’t know, I commute to Cincinnati from Dayton every morning, which is about an hour drive. Luckily, one of my co-workers also lives in Dayton, and about three years ago after I had some extensive car trouble, we decided to start carpooling. We generally alternate weeks. Recently pretty much the entire braking system in my car went bad, and my co-worker had to drive for about a month straight while I saved up money to get it fixed.

So anyway, we have to be at work at 7:00 am. I am not a morning person. I have worked at this job for 5 years, and I am still not used to the getting up early part, which is usually between 5:00am and 5:30am (sometimes I can push it to 5:45am). When my co-worker drives, he usually arrives between 6:00am and 6:30am. In order to make sure that I am awake during that period so I don’t miss his arrival, I’ll usually watch TV or a cartoon on DVD. If I’ve gotten ready super early, I’ll play a video game. This past week, I decided to doodle a little while waiting. In the dark, still pretty much asleep.