Flash on the Can 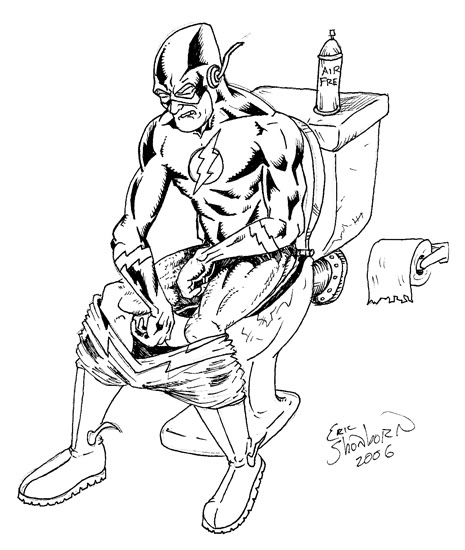 I can’t believe I have never posted this on this blog before.

My friend Joe G. is the curator of a Flash-themed sketchbook. He takes it to cons, has artists – most of them professional and A-Listers – sketch various Flashes in it. Back in 2006, I believe at the very first Gem City Comic Con, I convinced Joe to let me add my own Flash sketch. And it was this. To this day, I am still really stupidly proud of this. There is an inherent joy that I have in knowing that when Joe goes to conventions, big-name artists will flip through this book to see who else has contributed, and ultimately will look upon this with awe. If I recall correctly, I think I was present when Dave Johnson saw it, smirked and shook his head as he flipped through it. That, sirs, was the greatest moment of my life.

My inner-thoughts backstory for this sketch was that DC had not been using Wally West at the time. He was not officially dead or off-the-map or anything. They just… weren’t using him because Geoff Johns is a shitty writer and probably a bad person. So my excuse was that Wally had the shits.