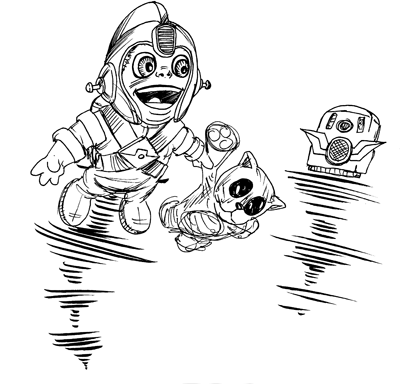 So today, apparently is “Creator Owned Day”. Basically, create a concept or character, post it on your blog, link to it via Twitter, hash-tag it #CreatorOwnedDay. This is where I read about it.

Seems simple, seems easy. I’ve been making up characters since the early 90s.

I had a very hard time under the gun. I could have just posted any old character I’ve had running around my head, but I decided to try a new concept.

It didn’t work out, so, with assumed permission from my friend Joe Grunenwald, I present ASTRO-TODDLER. Joe recently came up with the concept and name, and I just quickly sketched it out. We’ll be fleshing it out more when he gets back to town next week.

I did manage to come up with something on my own as well. That’ll be up shortly.