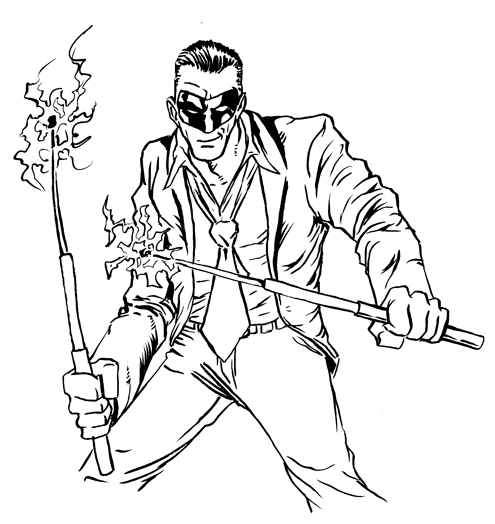 I posted this character last year for Creator Owned Day 2012. He and his partner have been popping up in my mind recently. There’s still a lot of work to be done into order to shape a story out of them. Right now, they’re inadvertent rip-offs of “Kick-Ass” and the movie “Super”. I need to find my voice in that idea. But I still like the visual ideas of the characters (who also still need names).

The movie for 3/4/13 was Bronson starring Tom Hardy’s cock and directed by Nicholas Winding Refn. It’s a bio-pic about Britain’s most violent criminal who has lived in solitary confinement for over 30 years. It was very good, but very artsy. Tom Hardy’s performance pulls together what is a very schizophrenic, gorgeous and violent, but comedic movie. That said, there was a lot of similarities to another movie called Chopper, another bio-pic about another dangerous criminal. I liked Chopper a bit more. There’s also some similarities with I Love You Phillip Morris, which I enjoyed, but I’d rank at the bottom of this weird list of biographical prison films.

See you in a bit.