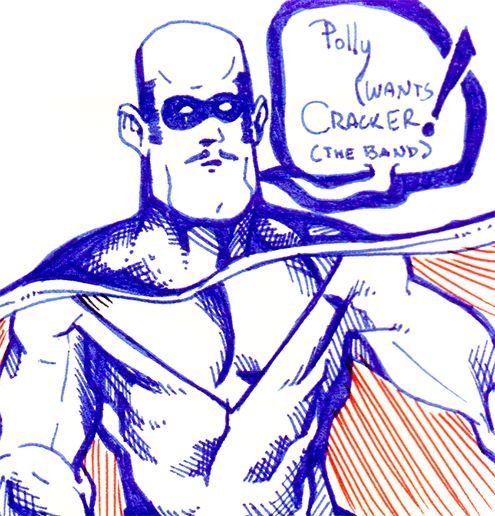 For the life of me, I couldn’t tell you why I would ever think of the band Cracker, ever.

So. I love big dumb action movies. The dumber and more ‘splodey they are, the better I like ’em. But apparently, there is a limit to how dumb a big dumb action movie can get before it’s just a terrible movie. A Good Day to Die Hard not only crossed that line, but shat on it too. I’m not entirely sure how or why, though, because I enjoyed the previous Die Hard movie, which is just as dumb and ridiculous. I think this one just pushes McClane too far into SuperHuman territory, which is the opposite of what a Die Hard movie should be. He’s basically the character from Unbreakable in this, if he got a bad-ass overhaul. Plus, we’re introduced to McClane’s son who’s just as unkillably bad-ass. There’s tension between the two, but no reason for it. It doesn’t help that the two actors have zero chemistry with each other. There’s a key supporting character with a daughter, but unfortunately the two actors there have too much chemistry, and I kept expecting a creepy father/daughter make-out session to reveal some twisty plot twist that they’re not really father and daughter. It was weird. Lessee, McClane keeps saying he’s on vacation (in Russia) even though he is not. I don’t think it was supposed to be a joke that he keeps saying it. At least, not in the way the writer thought it was. Russian characters switch back and forth between speaking Russian and English, even if there are no American characters around. It’s just a big illogical mess with a dumb “Die Hard” title slapped on it. And the two McClanes also spend the entire movie trying to get around a way to make a titular line of dialogue. It’s a just a clunk of shit. I did watch it with my Dad though, so, y’know, Father’s Day.

On the other hand, Hansel & Gretel: Witch Hunters is equally as dumb and illogical, but I enjoyed it a lot more. Jeremy Renner and Gemma Arterton (?) have a lot of charisma and are great as the siblings. This movie is a bunch of fun, visually enticing with some great sets and monsters. It totally knows what it is and doesn’t care. It’s not one thing pretending to be another. Plus, Peter Stormare is in it, and he makes everything better than it should be.