156. The Baron and Baroness 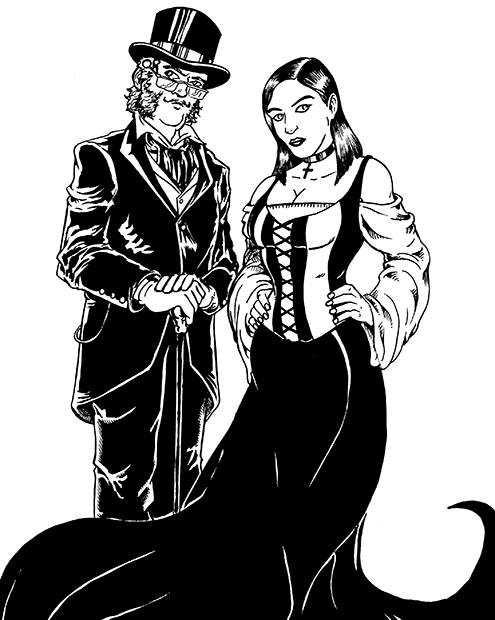 This was a long delayed commission for Matt Brassfield of his television characters Baron Von Porkchop and The Baroness (Baroness Von Porkchop? I’ve only heard her referred to as “The Baroness”. I think Hasbro and Larry Hama might have something to say about that) from Terrifying Tales of The Macabre, a local horror host program.

Last night, I watched a movie which maybe could have used a host. It’s called The ABCs of Death. It’s a 2 hour and 10 minute anthology in which 26 directors from all over the world were given a letter of the alphabet and made a short film based on that letter, as long as it somehow involved death. Most anthologies tend to run about 3-6 short tales, and even then some of them are fantastic and some of them are turds and then a couple mediocre ones. This movie has 26 stories. The law of averages on this movie is not great. So basically, there’s about 8 good films here and the rest are just so-so or terrible. Also, there are 26 stories! I can’t even remember what the sketch is above here.

It’s mostly foreign directors from all over and a lot of the tales have little to no dialogue. Some are clearly meant to be comedic, some are dark and twisted, a few of them are literally cartoons. But they are all just jumbled together in a way that is incredibly jarring. Such as the comedically animated “Klutz” followed immediately by the insanely dark and disturbing “Libido”. There’s also quite a bit of toilet and scatalogical topics throughout the film, so I guess foreigners think bathroom stuff is super-hilarious or disturbing? I dunno. It was just a weird trend I noticed. I recognized the names of a few directors involved. Nacho Vigalondo (Time Crimes), Adam Wingard (A Horrible Way to Die, V/H/S), Angela Bettis (an actress mostly, has directed one other movie I’ve never seen called Roman), Jake West (Doghouse), Ti West (House of the Devil, The Innkeepers), Xavier Gens (Frontiers, Hitman), Jason Eisener (Hobo with a Shotgun), Jon Schnepp (Metalocalypse) and Kaare Andrews (most notably a comic book artist who did a fantastic run of Hulk covers during the early 2000s, but apparently has directed a couple things I’ve never seen).

Of that list, Vigalondo, Wingard and Schnepp were among the most memorable of the films (“Apocalypse”, “Quack”, and “WTF?” respectively). But seriously, if the phrase “Mixed Bag” could be singularly defined, I would point to this movie. I can’t recommend it, but I can’t not recommend it either. Watch at your own risk.

I also remember hearing about this movie a while back. I think the creators of the concept reached out to a lot more than just 26 filmmakers. I recall comedian Paul F. Tompkins starred in a entry for the letter “T” and was asking his fans to vote for their film. It did not make it. “T is for Toilet” – a claymation story about a toilet – did.

So there you go. That should probably make your decision for you on whether you want to see this or not.