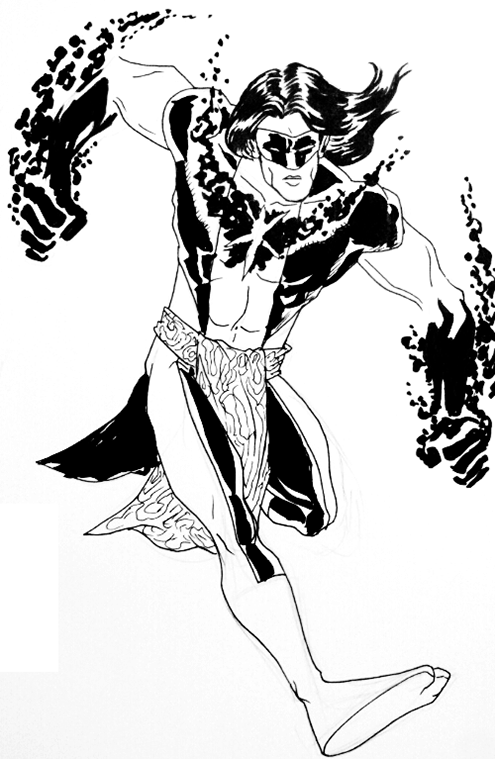 I’ve been wanting to do this for a while. I wanted to create a pastiche of a character – much like Kurt Busiek’s Samaritan is to Superman, Midnighter to Batman, etc. I sent a text to my friend Kathleen for a suggestion to start my base idea on. Her response was “Spider-Man, but Jewier”.

I told her I wanted a more obscure character to work from. So she said “Iron Fist, but Jewier”.

Again, laughter. But, that explains yesterday’s post for ya.

That said, Iron Fist was a great choice. So this is my sorta reinterpretation/analogue/pastiche of Iron Fist.

As a young boy, Tommy Master’s parents took him on a trip to China to meet his family on his mother’s side. During the trip, his parents were killed in an accident. Tommy’s father had no other living relatives, so his mother’s family took him in and raised him in the family village. Tommy studied – and excelled at – martial arts as a coping method.

The village however, has a curse. A demon lives in the forest just outside the village. In order to live peacefully, the village elders made a deal with the demon. Every five years, the town must send – either by volunteer or lottery – one villager to fight the demon. If the villager wins, the demon is defeated and the town is no longer threatened. If the demon wins, he accepts the villager as a sacrifice and leaves the village alone.

When Tommy comes of age, he volunteers to face the demon. He treks to the forest and fights the demon. The battle goes one for days. Weary, Tommy and the demon take one final attack at each other and plunge their hands into each other’s chest, removing their hearts. In his final act of desperation, Tommy places the demon’s glowing, jeweled heart into his chest cavity. The move heals him completely and fills him with the demon’s power. He destroys the demon using his newfound abilities.

With his village finally free from the demon’s thrall, he decides it’s time to finally return to America, where he inherit’s his father’s fortune and decides to use it, the demon’s heart, and his skills as a master of wushu to protect the innocent and defenseless.