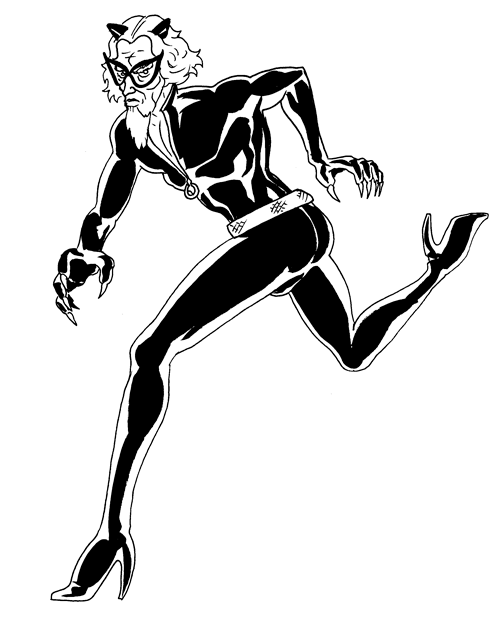 Suggested by Nick Marino, Uncle Sam as sexy Catwoman. Oddly, I was watching the 2nd ep of GOTHAM while drawing this, which fully introduced Selina “Cat” Kyle to the show. So, while I’m gonna stick with it for a bit, I’m pretty sure I hate GOTHAM. It’s not a good show on two levels, 1) as a Batman fan and 2) as a fan of good tv. Every bit of it is the most dumb, cliche, by-the-numbers cop show b.s., but with the added stress of being a Batman show without Batman that the writers clearly wish Batman was in. So much so that a 12 year old kid who just watched his parents die two days ago is already pretty much Batman, but gothier and more metal, and speaks like no one ever. Also, I guess the show does an alright job of explaining how young Bruce becomes Batman: his parents were fucking terrible people. “Oh, we just let Brucie do whatever he wants, because he’s rich and a child. And if we die, we’ll just let our British street-thug butler slap him around and continue our legacy of horrible parenting.” Of course, it also shows how Batman will be so successful at cleaning up Gotham, because all his villains will be in their 60s by the time he straps on the utility belt. Ugh. Also, the villains of this episode were cartoonishly absurd to the point that they’d almost fit in better in the Adam West Batman show. Admittedly, my stance as a Batman fan is in direct opposition to the majority of folks who claim to be Batman fans, so the show is clearly just not for me. But it’s Batmanish, so I’ll keep watching ’til I don’t.