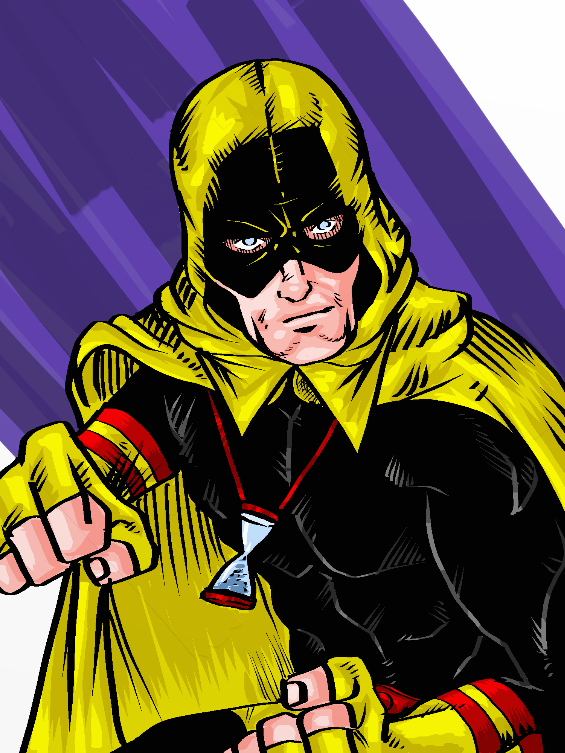 Time is a flat circle, and to celebrate day 360, here’s Hourman. Hourman is actually a secret favorite character of mine. Mostly it’s the hoodmask. He’s definitely one of my favorite Justice Society members. Even though I’ve grown out of the grim ‘n’ gritty “realistic” superhero thing, I always like Rex Tyler’s portrayal as an addict.

The gimmick, for those not in the know, is that Rex was a Pharmaceutical scientist who created a drug (Miraclo) that would give him super strength and speed for one hour, every 24 hours. So, cocaine.

It was later retconned that he was addicted to Miraclo (who wouldn’t be?). And it made perfect total sense. Eventually Rex died and his son Rick (?) Took over the role. If I remember right, he also had some addiction issues.

In between that, there was the Hourman android from the future (introduced in Grant Morrisons JLA & DC 1,000,000 series). That character went on to star in one of the best DC books of the late 90s/early 2000s. Seriously, track it down. It’s hilarious, fun, mind-boggling and awesome. I should draw that version some time…

Another recommendation, the golden age Hourman was one of, if not the only, JSA characters to appear in the superb “Sandman Mystery Theatre” comic that Vertigo put out. It’s an incredible comic that I cannot stress enough how good it is, but at the very least the Hourman arc is worth tracking down as well.