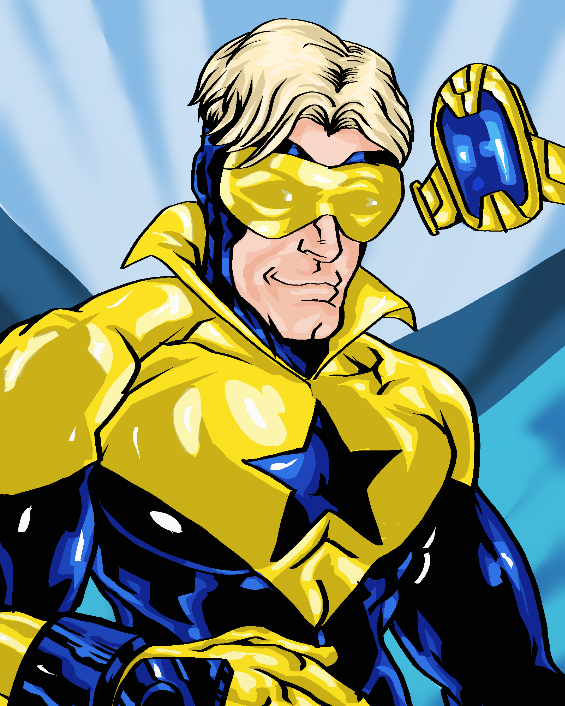 Haven’t drawn a lot of Booster on the blog despite being right up there with Blue Beetle as a favorite character. ‘course the reason he is up there is due to the Blue & Gold friendship being awesome. Also, DC’s insistence as portraying Booster as a goofy fuck-up or grim serious time traveller with no in-between is bothersome. Oh well. I look forward to the launch of Blue v Gold: Blood-fuck Time Boogie from DC: Rebirth This, Motherfuckers in two years time.

I don’t write a ton of stuff on the blog anymore, which bothers me at times, for my own narcissistic reasons. Comes with the territory of mostly doing the uploads/updates via my phone.

I’m gonna try to make the time to do a little more.

So I watched some movies in the past week. The first was a documentary called The Nightmare. It’s directed by the guy who did Room 237, a fantastic documentary about crazy people with too much time on their hands, and not a shitty documentary about The Shining, like some folks tried to convince me it was. However, The Nightmare is kinda “eh”. The concept is fascinating. It’s a look at 8 or so people who suffer from sleep paralysis – dreams in which they can’t move or communicate, and are often visited and abused by malevolent shadow creatures. Unfortunately, the movie never veers in any direction or investigation. It’s just these people telling their stories. It’s fascinating, but ultimately unsatisfying and empty.

I also ventured out to the theater last night to see a movie called The Witch, and I wish I hadn’t. The movie itself is excellent, and also absolutely not for everyone. It’s quiet, it’s dangerously slow, and since the movie takes place in the 17th century, it’s hard to understand. The characters speak English, but it’s Olde English, which at times makes it difficult to comprehend, exaggerated the by the characters’ thick English accents. It’s a movie that requires some concentration to follow. It’s a film that uses atmosphere and tension to build up fear and unease to the (rare, but effective) scares and to the movie’s climax. Unfortunately, the world is full of assholes, idiots, and teenagers, and apparently they all went to see the movie with me last night. Surrounded by dumbfucks who are texting or checking their phones; talking to each other constantly; heckling the movie they can’t sit through or understand – it really breaks the mood the movie is working to build. I get why people would hate it, totally. But Jesus Fuck, keep it to yourselves until you are in the lobby. People need to internalize their reactions more, and just shut the fuck up and suck on some mufflers. As soon as the credits rolled, one assfuck actually yelled at the screen “What the fuck did I just watch?!” Well, I watched a great movie that you ruined. I can’t recommend The Witch enough, but watch it at home, alone.