747. The World Was Wide Enough 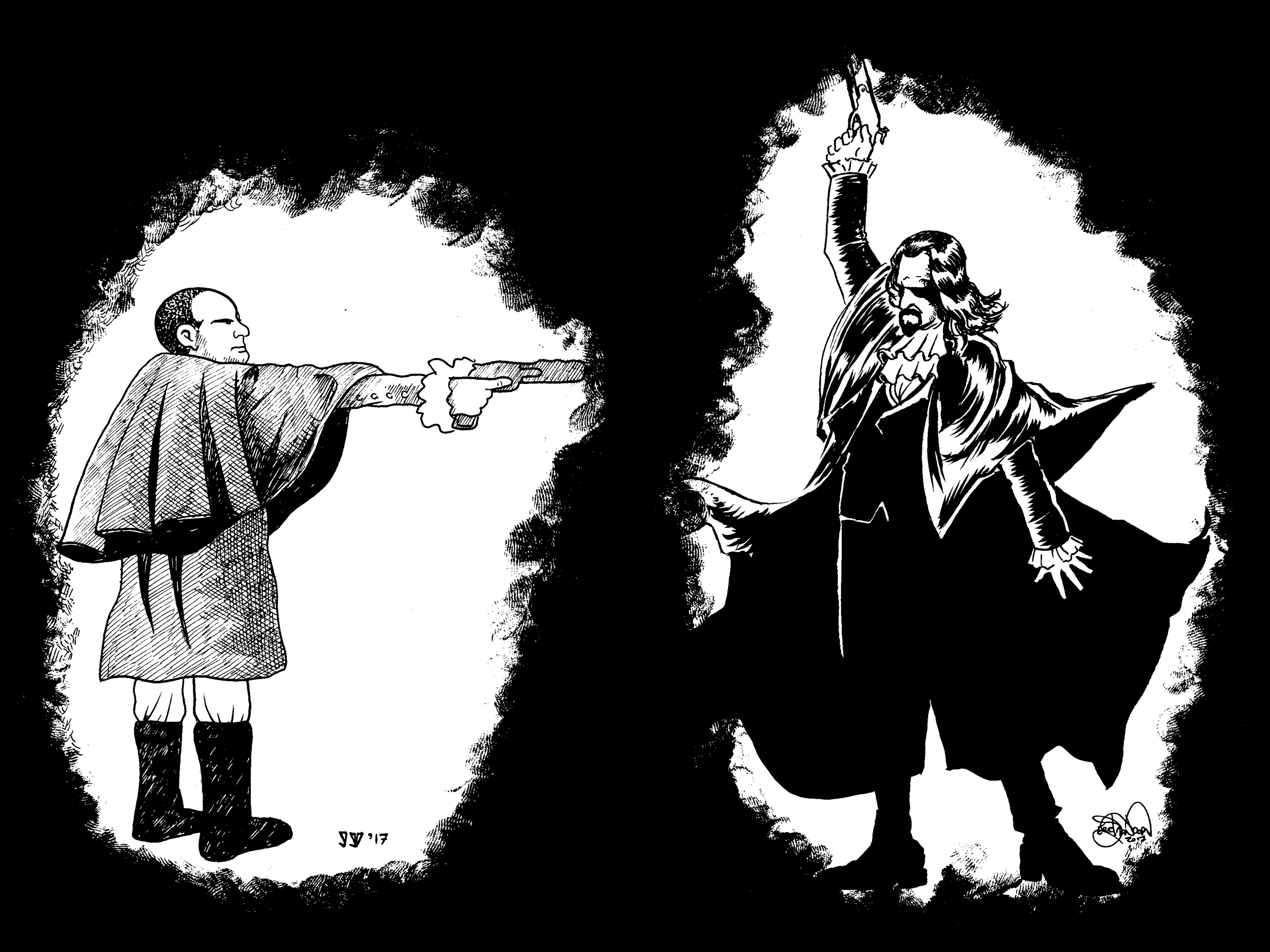 My friend Joe G.’s birthday was yesterday. I coerced our friend Jason Young into a quick collabo to give to Joe as a birthday gift. Joe and his wife are big fans of the musical Hamilton, and Jason and I thought it’d be an interesting experiment to draw something other than The Flash, Kid Flash, Batman, or The Flash. I am relatively well-known for my lack of interest in musicals and Broadway shows, but even Hamilton has made its way into my realm of knowledge. I’m not sure how Jason knows of Hamilton…? Incidentally, we flipped a coin to see who got to draw Hamilton or Burr.

The thing is, Joe’s wife got a job offer in Washington state, and this is the last birthday I’ll be able to force a dumb drawing on him because I am poor/cheap.
Joe and I have spent the majority of the last few years’ worth of Wednesdays watching tv shows and recording podcasts about them. Even when not recording podcasts, we still typically hang out on Wednesdays. A quick trip to the comic shop, a food run, and then podcast or something. Joe is the guy with whom I go to the majority of comic conventions I attend. The only person I’ve seen more movies in a theater with other than Joe is my ex-girlfriend (my Mom probably counts, but whatever).

In fact, on Joe’s birthday, rather than him spend it with his family or his wife, he and I went to see Lego Batman. And while Joe still has a few months left here in Dayton, it hit me that this might be the last time he and I go to the movies together. And, an incredible sadness overcame me.

The long-time listener knows that I suffer from severe depression. Life kicks me around, and I suffer heartache and loss with the worst of them. The last few years in particular have not been kind. But this… this is a new and different sadness.

My ex-girlfriend often joked that Jason was my hetero-husband, but Joe was my hetero-boyfriend. It might be kinda true in a way. Jason and I often have intersecting nervous breakdowns, and it can be difficult to lean on each other as friend when you’re both broken. But Joe. Joe was always there to lighten the mood and be hilarious and awesome. When she left me, the very next night Joe invited me to the movies with him and his wife (Avengers: Age of Ultron). When I emotionally couldn’t do the podcast anymore, Joe continued to hang out on Wednesdays with me. We went to damn near every dumb comic show in the Dayton/Columbus/Cincinnati area. When we started the podcast back up, we just jumped back to where we left off. We joked about my depression, and things got dark, but it was always funny, and it made me feel better.

Joe Grunenwald went from being that dorky guy at the comic shop I got along with to being one of my best friends and one of the best human beings I’ve ever encountered. When he leaves, I’m sure I’ll see him again. His family is still here. He’ll visit, I’m sure. We’re gonna try to continue the podcast via Skype or magic or something. We’ll chat across the internets and social media.

But, worse than any ex-girlfriend, worse than a dead relative, I’m gonna miss Joe G. more than I can accurately describe with these dumb words.