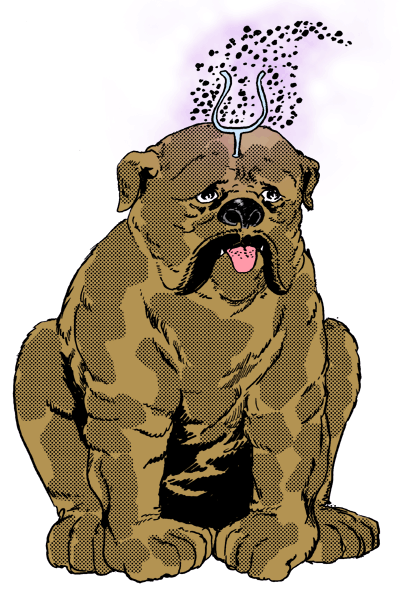 Fulfilling a request from Kurt Dinse, he had asked for Lockjaw, the teleporting dog from Marvel Comics’ The Inhumans. I think Kurt was deliberately trying to make me struggle. If there’s one thing I struggle with more than anatomy, backgrounds, coloring, details, likenesses, proportion, perspective, consistency, inking, penciling, the female form, faces, eyes, hands, feet, shading, layout, clothing, inanimate objects or plants is animals. That said, I kinda dig the way Lockjaw turned out here. He looks like a petable dog.

As for Kurt, he is ridiculously talented artist in his own right. He is the publisher/writer/artist of One Year in Indiana, the saga of death metal vocalist Conrad Lant and the year he spent living in Indiana between tours on a college campus. It’s a fantastic comic about beer, college douchebags, monsters and idiots. He is also the artist of the comic Hurr and Star.

I stumbled onto Kurt’s work at the annual SPACE convention in Columbus, Ohio. I’m an idiot metalhead and saw the pentagram logo of One Year and needed to buy it. Through means that I am not completely aware of, Kurt became a listener of my podcast, and eventually a guy I now consider a friend. I have been drunk in his company, and if that isn’t a basis for friendship, I don’t what is.

Kurt is also the newest member to the art collective I am a part of, Ok, PANIC!. As of this writing, he only has one piece up, but it’s a pretty fantastic debut. Kurt’s other works (comics, rock posters, etc.) can be found at Pungent Basement Art.

For giggles, here’s a piece of art my pal Jason commissioned from Kurt for my birthday about a year or two ago. 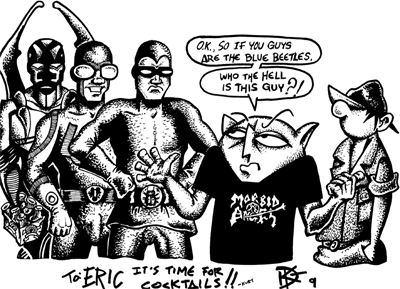 As you can see, Kurt is the King of Stippling. At once, I admire and do not envy his ability to do that so well. Go check out his site, he’s awesome.