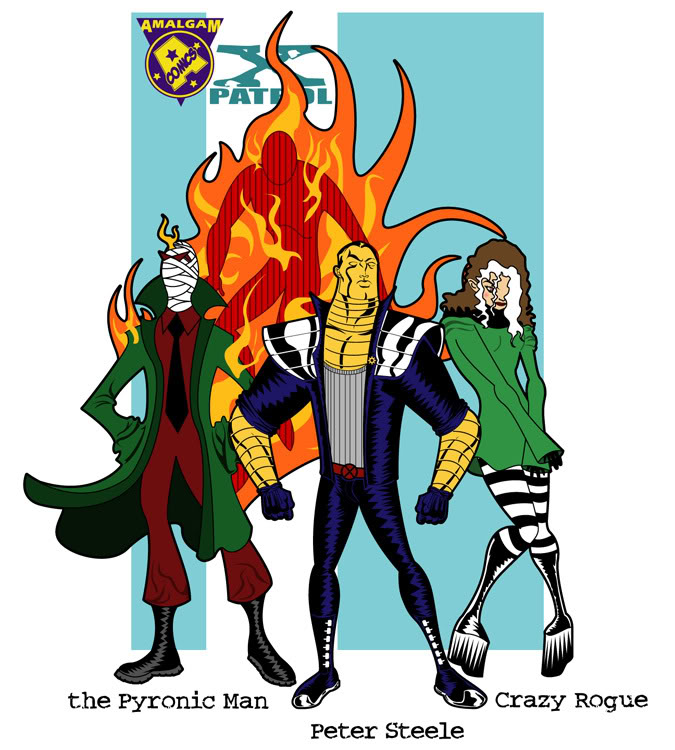 When Marvel & DC teamed up to do the Amalgam Comics experiment, they did an X-Patrol comic (X-Men & Doom Patrol). It wasn’t that great. It combined the 90s X-Men with the more classic version of the Doom Patrol.

After reading (and loving) Grant Morrison’s version of the Doom Patrol, I thought that they should have used his version of the team and combined them with similarly suited X-Men characters.

Peter Rasputin (Colossus) and Cliff Steele (Robotman) combined to become Peter Steele (also the name of the Goth-Metal singer from Type O Negative – pretty much my sole purpose of doing this drawing was for that joke that only I find funny).

Crazy Jane (a multiple personality disorder sufferer, whose different personalities have different powers) and Rogue (who gains others powers and minds temporarily when she touches them) became Crazy Rogue (she’s permanently gained every person she’s ever touched powers and personality, which drove her insane).

Negative Man/Rebis combined with Human Torch to become the Pyronic Man. Yeah, Human Torch isn’t an X-Men or even a mutant. Don’t care. The visual is what was important, and no X-character fit.

Anyhoo just a bit of fun done entirely in Adobe Illustrator. There are pieces I like, but a ton I don’t. I’ll blame those on the fact that I didn’t start with a sketch.

The Jack Staff episode is up at Gutter Trash, my weekly review podcast. Next week: Apocalypse Now
.