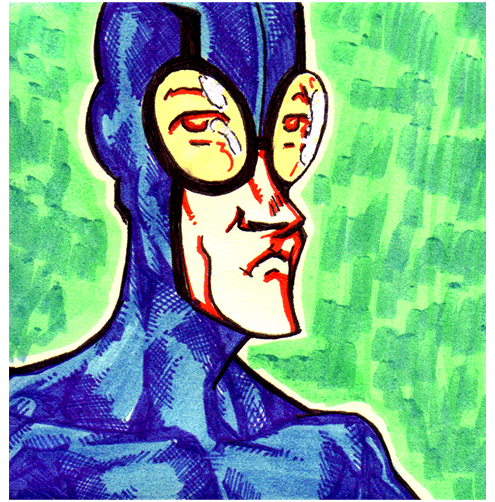 Last night, I worked a shift at my local comic shop.

I used to work there, about 12 years ago. I used to shop there until about a year ago. I still maintain a pull list there. It contains two Strangers in Paradise trades and the Captain Nemo/League of Extraordinary Gentleman spinoff graphic novel. The actual list consists of Mind MGMT, Aliens vs. Parker and Five Ghosts – the latter of which needs to get scratched off the card. I also pull random things that I either missed when I fill out my normal order through my current service (like the first issue of Snapshot or stuff that I just jumped on to that will still be a few months before I can add it to my normal order (like the aforementioned Five Ghosts, or a Captain Marvel).

Anyway, my friend Brian is in town for a few days and staying with my other friend Jason – the manager of the local comic shop (which is more of a Magic: The Gathering shop). Jason had to work last night and invited me to hang out at the shop, where Brian was meeting him. On Tuesday nights, after the store closes, they put out the new comics for Wednesday morning and pull the books for all the file customers. I wasn’t just going around while that happened. There’s nothing better than fresh comics. I wanted in. So, I helped count and organize the books and helped pull the books for the file customers.

It was fun, but also kind of sad.

I pulled the books for about three boxes of worth of customers. I got no beef with Marvel & DC, for the most part. Read what you like. I certainly do. But the amount of people I saw with absolutely no indie or creator-owned comics kinda broke my heart. And I found the ones that only had TV show adaptations to be even more sad. OThe guys with only indie and creator-owned books that hadn’t been made in years kinda cheered me up in an even sadder way.

Still it was fun hanging out with my friends and working with comics. And drinking.

I got paid with a reprint book of old Chris Claremont/John Byrne Starlord comics called The Hollow Crown. Seems worth it.