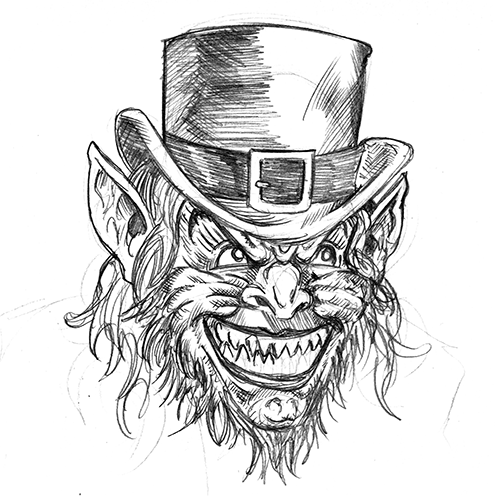 So for the past 6-7 years, roughly every Saturday night, my friend Jason and I get together for “Drawing Night”. It’s pretty much in the top 5 things I look forward to every week. The tradition started over at the house he used to live at where all sorts of visitors would drop by and be annoying.

Sidebar: The very first drawing night ever, one of Jason’s friends was being released from jail and Jason was supposed to go pick him up. The guy found another ride and came to Jason’s house where he went on a massive rant about wanting to kill his family, who had pressed the charges to send him to jail, and subsequently paid his bail. I had never met this dude before. So, y’know, good times.

Eventually I got tired of going to these places that Jason lived without air conditioning in the summer and we moved drawing night over to my house. Occassionally, like last night, I went to Jason’s place along with our friend Joe. A time was had by many. While we worked, we also watched Leprechaun and Leprechaun 2. Cuz why not? So, I decided to sketch the li’l guy.

Earlier in the day, I watched the 1981 Legend of the Lone Ranger film. It’s not a great movie, but I liked it a ton better than the recent Johnny Depp abomination. To be fair, I loved this movie as a kid and watched it all the time. But usually, nostalgia is an ugly bitch, and that this kind of held up says something, I think. It definitely is unfairly maligned and a lot better than it’s reputation presents.