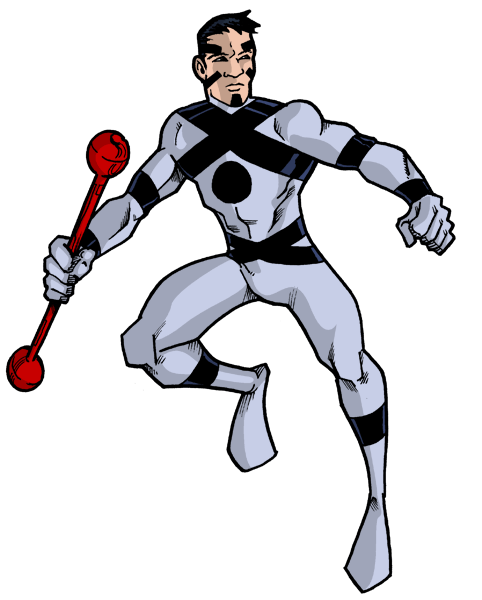 Unlike some other silver age characters that were eventually replaced with modern counterparts (Barry Allen, Hal Jordan), I have nothing against the Ray Palmer Atom. In fact, I’d almost say that I’m a fan. Unfortunately, this all stems from the only Ray Palmer Atom series I’ve really read, The Sword of The Atom, which saw the character transform from a sci-fi superhero to a sword-and-sorcery/fantasy/Warlord Travis Morgan-type character. And it was pretty great, though it has been years since I’ve read them.

But despite that, I found myself really enjoying the Ryan Choi Atom when he came along, and that is who I chose to draw here. His costume was a simple and perfectly fine upgrade of Ray’s (though the colors were positioned wrong). But I came up with this basic design of an Atom costume back in like 1996. You can see my microhero version of that original concept on the micros site. I changed up the colors here because it felt like I’d been using a ton of red lately and my quota is almost up.

Last night I watched Maniac starring Elijah Wood as a serial killer. Which isn’t much of a stretch. He’s got the crazy eyes. It was… okay. I know it’s a remake, but I’ve not seen the original. I don’t know if the basic concept is the same or not, but this one is shot entirely from Wood’s point of view. It’s a First Person Movie. There are one or two moments when we shift perspectives and a flashback or two, but we really only see him when he looks in a mirror, etc. It can take a bit to get used to. It’s gory and weird and a little overwrought. I’ve also never been a fan of Elijah Wood, so hearing him as a whiny psychopath for 90 minutes didn’t do anything to change my mind on that.