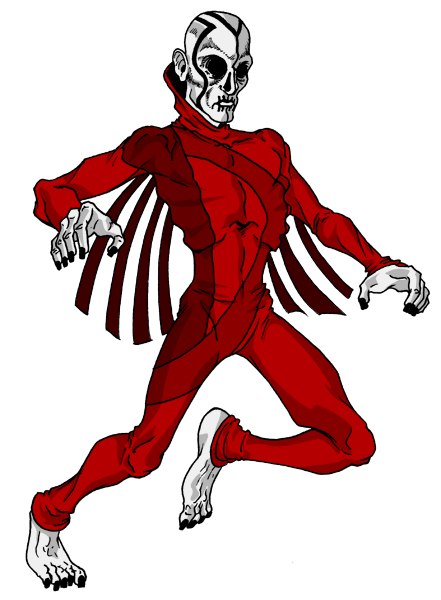 I “get” the original look for Deadman. Boston Brand was a circus acrobat, so it sorta looks like that, crossed with a superhero costume. And a large “D” on his belly. For some reason. So going off that, I tried to base Deadman’s look on some Cirque Du Soliel-type outfits and makeup. Also, I wanted to retain some of the Kelley Jones style that I will forever and always associate with the character. Whenever he shows up looking “normal”, I just feel it’s absolutely wrong.

I tried to watch Arrow as it aired, but due to other Wednesday night obligations and general dislike of what I had seen, I gave up on it pretty quickly. It recently popped up on Netflix, so I decided to give it an honest binge-watching shot. I still don’t particularly love it. But it’s watchable. I do think I like it better than network television’s other big comic-related property, Agents of S.H.I.E.L.D.. I think the characters are more engaging and less annoying and the overall story more intriguing, if not stretched to the very limits of tolerability. SHIELD’s characters (outside of Coulson & May) are vapid empties. When they are busy not making me give a crap about them or what they do, I am highly irritated by them and what they do. Arrow – while every single last character is a vapid empty – I am not annoyed by their presence. One thing SHIELD gets right: cutesy winks.

Both shows offer up a lot of winks and nods to comic fans with names of things and references to their universes and whatnot. SHIELD is a little more subtle and clever with them, though, and makes it seem like each and everytime it happens, it could be a possible plot point or something that comes later. Everytime Arrow does it, it’s like the writers have cold-stopped the show, walked onto the set and while looking at the camera, begin to scream directly to the viewer a sorrowful “THIS IS FOR YOUUUUUUUUUUU!!!!!!!!!! ALL FOR YOUUUUUUU!!!!!!” and then break down into some shame tears.

So yeah, I think both are watchable, just not very good. I know not every show can be THE WIRE, or BREAKING BAD, or JUSTIFIED, or RESCUE ME, or the first couple seasons of DEXTER, or DOCTOR WHO, or THE LEAGUE, or IT’S ALWAYS SUNNY IN PHILADELPHIA, or 30 ROCK, or THE WALKING DEAD, or…

Actually, y’know, there’s a fuckton of good tv shows out there, I feel like there’s almost no excuse to make mediocre shows anymore. Fuck you, Arrow and Agents of SHIELD! I’ll see you next week.