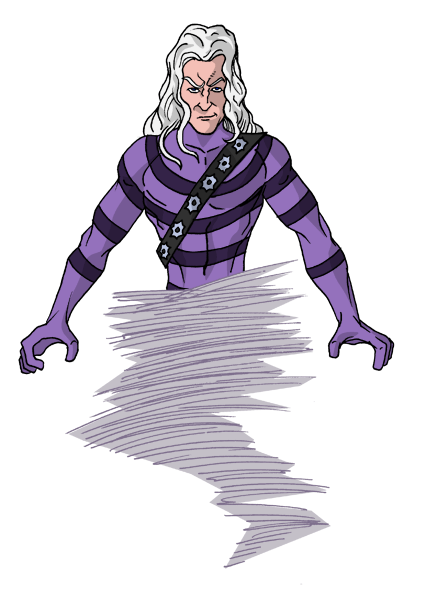 This was a tough one to get around and I absolutely failed. In the comics, Riptide – one of Mr. Sinister’s Marauders that killed a bunch of Morlocks in the Mutant Massacre – is pretty much always in human tornado mode. Looking him up, it took a while to find out what he’s wearing under the tornado. And the answer is: either a plain solid white bodysuit, or a plain solid purple bodysuit. I also found out that he was in the movie X-Men: First Class. He wears nice suits in that. He also made such an impression that I was completely unaware that he was in the movie despite having seen it at least twice. So basically, fuck Riptide.

The only comic I’ve read with this character was actually one of the first X-Men books I ever read, part of the aforementioned Mutant Massacre. In it, Riptide is spinning around, killing morlocks with throwing stars as Colossus charges him, grabs him by the throat and snaps his neck. It’s a great, memorable scene.