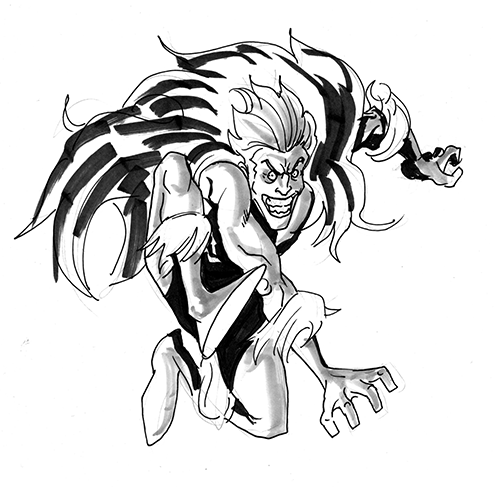 So. Five days on, the death of Dave Brockie is still affecting me. My friend Jason and I were discussing it, and we can succinctly sum it as a super-bummer. But even that seems too light. Because it is truly bothering me. Celebrity deaths don’t mean anything to me. Even when someone like Phillip Seymour Hoffman dies, it’s more like “that’s just a real shame, y’dig?”. I do think I’ve managed to figure it out though.

We live in a world where Dave Brockie, in his guise as Oderus Urungus – alien warrior and lead singer of GWAR – can be credited as a Fox News Correspondant. That is ridiculous and awesome, and that is EXACTLY the world I want to be living in.

Brockie was basically – in a way – living the life I wish I could lead. He was an artist who was able to make a living off his talent and skill and was doing it in the most ludicrous fashion possible. He was living the fantasy of every 14 year old artistic boy who had a love of comics, horror, sci-fi and rock’n’roll. He was an artist, a sculptor and performer and took what he did seriously even when what he was doing was the complete oppossite of serious. GWAR has satire and some political and philosophical beliefs that could come through, but then again, there’s little to no subtext in a song called “Fish Fuck”. He got to indulge in his passions, be famous AND anonymous, and make a living being an artist and revelling in the ridiculousness of it all.

There are rumors that police are investigating his death as drug related, and if that turns out to be the case, then I couldn’t imagine a more disappointing situation. But still, the music and imagery of GWAR was a large part of my adult life and it won’t be the same without it as a continuing presence.

So hey, speaking of ridiculous and awesome, let’s talk about The Creeper.

I’ve never been a Steve Ditko fan, despite the fact the he created and co-created a ton of characters in my top 20 favorite superheroes. The Question, Captain Atom, Spider-Man, Dr. Strange, Shade the Changing Man, the Ted Kord Blue Beetle (my favorite superhero of all time), and of course, The Creeper.

I’ve come to respect Ditko for sure, but even despite all the above, I’m still not a fan so much. Mostly, my love for all those characters come from other creators doing great things with the core concepts. But still, can’t deny his contribution or the awesome way he draws hands. I know he’s mostly now a crazy Ayn Randian recluse and that probably adds a air of mystique to him and his work.

Anyhoo, a few years ago I bought a hardcover collection of all of Ditko’s Creeper comics. Only recently did I start reading it. The Creeper’s original origin is so overtly complicated, I’m honestly shocked that he’s endured as a character for so many decades. Sure, he’s barely a D-lister, but still.

Of course here’s where I bitch about DC Comics and New 52. You can just make up your own rant here.